With U.S. 199 motorists shifted over to the new Applegate River Bridge, prime contractor Carter and Company of Salem is only weeks away from wrapping up the bridge replacement project west of Grants Pass.

“Traffic switched onto the new bridge earlier this summer,” said ODOT Project Manager Ted Paselk, “and since then Carter’s been doing finishing touches on the new bridge, as well as dismantling the work bridge and detour structure.”

The $5.9 million project replaced an aging and load-limited, 58-year-old structure that was located eight miles west of Grants Pass on the Redwood Highway.

The new Applegate River Bridge is about 20 feet wider, providing a safer buffer for oncoming traffic that also accommodates bicyclists and pedestrians.

More importantly, the new Applegate River Bridge is built to handle traffic today and for the future.

Vital Connection
When the existing bridge was built in 1955, about 2,000 vehicles crossed the 547-foot span daily.

By 2012, that number had increased five-fold to 10,300 vehicles per day. The old bridge’s narrow 30-foot roadway and bridge rails did not meet today’s safety standards, enforcing the need for replacements.

“The Applegate River Bridge is a vital connection between Interstate 5, the Illinois Valley, northern California and the Oregon coast,” said Paselk. “This project ensures that transportation resource will continue to serve for generations to come.”

The new bridge railing meets today’s safety standards and, unlike the old structure that had six supports in the river channel, the new bridge has only two.

The bridge is also slightly wider on the west end to accommodate a new turn lane at Riverbanks Road. 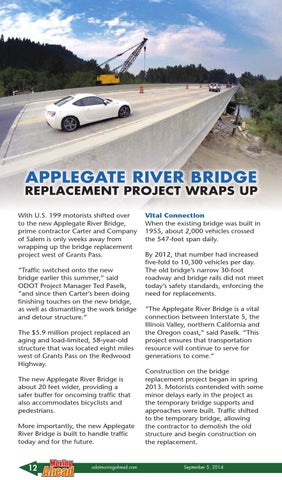