Cave Junction is developing a lane conversion project on U.S. 199 that will be added to an ODOT paving project scheduled for 2015.

The lane conversion calls for converting the number of through traffic lanes from four to three, including a two-way, left turn lane. The design adds bicycle lanes on both sides of the Redwood Highway and improves pedestrian access along a half-mile section in the city limits.

“TGM grants provide money to help local governments plan for their future transportation needs,” said ODOT Planner John McDonald. “The TSP is even more beneficial when there is a project scheduled for construction within the next few years. Cave Junction is working with ODOT to make that project better for everyone.”

“Our biggest traffic complaint is speeding through town,” said Nolan. “We are appreciative of the ways ODOT has worked with us to help slow traffic down.”

ODOT worked with Cave Junction to identify potential improvements that would address local traffic concerns. After examining traffic patterns, volumes and collisions, Cave Junction and ODOT determined that a lane conversion would solve a lot of problems.

“Changing this to a three-lane section with a center turn refuge will lower the crash rate,” said ODOT Traffic Engineer Dan Dorrell. “It will also make downtown Cave Junction more livable, and safer for cyclists and pedestrians.”

The city is leading the discussion with the public. City staff hosted open houses and shared the design concepts at public art walks and city council meetings.

Last May, the city council made a formal request to ODOT for the lane conversion. Mayor Carl Jacobson followed with a letter of support.

“This proposed change to our main street, and our community face to passersby, has seen good response from the public,” reads Mayor Jacobson’s letter to ODOT. “Thank you for bringing this option to us as an idea.

“We appreciate your time and energy and hope to work with you in the coming years to improve the safety and efficiency of our transportation system here in Cave Junction.”

Cave Junction is expected to complete its TSP update by the end of the year.

With construction not planned until 2015, ODOT and the city will refine the project’s design.

“The lane conversion design is a win for all,” said McDonald. “Businesses will have improved access and drivers, bicyclists and pedestrians will all reap the travel and safety benefits.” 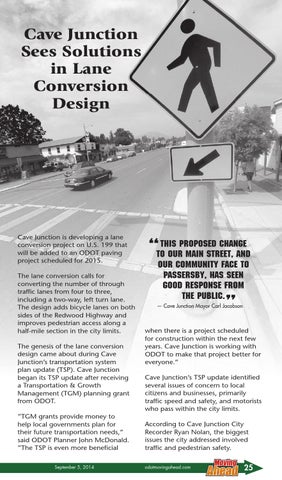