Local residents, business owners and commuters who live, work and drive along the Oregon 99 Corridor from north Ashland to south Medford expressed clear-cut opinions about the future of the highway.

According to ODOT Planner Ian Horlacher, Oregon 99 was under the microscope this summer after the agency released a draft corridor plan for future improvements.

“We received a lot of public input at our summer open house, as well as from our media interviews,” said Horlacher.

Started in 2010, the Oregon 99 Corridor Study is working to find ways to enhance transportation safety and capacity over the next 20 years.

The study’s technical advisory committee is comprised of representatives of the local jurisdictions along Oregon 99, including Jackson County, Ashland, Talent, Phoenix and Medford.

“We’re trying to find a balance that meets the operational needs of the highway and the local communities,” said Horlacher. “Much of that balance is tied directly to safety issues.”

Travel volumes along Oregon 99 decreased over recent years due to the recession, technological advancements and other social changes. However, with 15,000-17,000 vehicle trips per day along the corridor, Oregon 99 needs improvements. During 2005-2009, 308 traffic crashes (most were rear-end collisions or involving cars making left turns) were reported along this section of Oregon 99 being studied.

“There is no one project solution for the entire corridor but there are options for many different improvements,” said Horlacher. “The improvements include better access and signage to the Bear Creek Greenway.”

The improvements are relatively low cost because they involve striping within the existing highway width and no need for right of way purchases.

“Right now, we’re addressing comments, and finalizing the draft plan,” said Horlacher. “We’re looking forward to sharing those with the cities and the county, with adoption hopefully later this year.”

For more information about the Oregon 99 Corridor Plan, visit the project website: http://www.oregon.gov/ODOT/HWY/REGION3/Pages/OR99Corridor.aspx. 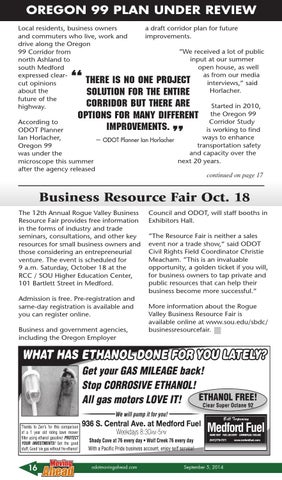