Traffic patterns adapted to the openings of temporary southbound on- and off-ramps as well as a temporary connector to east Phoenix.

“Traffic switched as smoothly as a light switch,” said ODOT Project Inspector Dennis Steers. “Traffic has been moving well since the change.”

Opening Grove Way
The next major construction phase — the opening of Grove Way — is underway behind Home Depot, far from the more visible work zones drivers have driven through all summer.

“Grove Way is rocked and nearly ready for paving,” said Steers. “Grove Way will be the first new road to open. This project milestone also signals another major traffic shift.”

Opening Grove Way will allow more phases to kick in, including the replacement of the existing northbound on-ramp with a temporary northbound on-ramp near the Lazy Boy Furniture. Another phase to follow is the closure of the existing North Phoenix Road in front of the Home Depot. That last phase will allow the contractor to essentially push a large mountain of dirt across the old roadway to serve as for the new I-5 bridge.

Once the temporary northbound on-ramp opens, the project focus shifts to completing the new bridge spanning I-5 and the first phase of the Bear Creek Bridge to the west.

The design also helps keep traffic congestion to a minimum while increasing safety.

“The Diverging Diamond design provides a higher capacity to move traffic while reducing right of way needs,” said Steers. “Drivers will move to the opposite side of the road to enter I-5 or to cross it. This movement reduces the number of signal phases a driver needs to clear.”

“The traffic simulation video makes it much easier to explain how the new Fern Valley interchange will operate,” said ODOT Public Information Officer Gary Leaming. “From our project outreach during the South Medford Interchange project, we learned that a picture or, in this case, a video, is worth a thousand words. Once people see it, people get it.”

Work Zone Safety
I-5 drivers are benefitting from many safety features in the Fern Valley Interchange project work zone. Beyond cones and barrels, the project employs TripCheck traffic cameras, the Rogue Valley’s first Incident Response vehicle, and transverse rumble strips that have been built into the temporary southbound off-ramp to notify drivers of the upcoming tight, 20 mph curve before reaching the signalized intersection.

“Studies show that driver inattention is the biggest factor in work zone crashes.”

Oregon State Police patrols the work zone. Traffic fines double in work zones, even though there are no workers present.

Bear Creek Bridge and Greenway
The Bear Creek Greenway crossing was temporarily replaced at grade with Fern Valley Road because of the bridge construction.

Staying close to construction
ODOT opened a temporary construction office within ‘The Shoppes at exit 24’ shopping mall to serve as a base of operations for the project inspectors. The public is welcome to stop by the office for more information.

ODOT includes the changes in its weekly construction report. More specific changes, including explanatory videos, are highlighted in a separate Fern Valley Construction update. Sign up for these updates at: https://public.govdelivery.com/accounts/ORDOT/subscriber/new?. 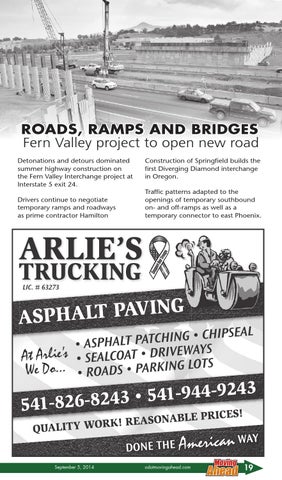