Scott Chancey is the Josephine Community Transit Program Supervisor, overseeing a staff who work in the Josephine County Public Works Department. Chancey joined the agency in 2009, marking a return to the Grants Pass community where he was born and raised.

Is the biggest transit news the launch of the Rogue Valley Commuter Line (RVCL)?

“The RVCL is an important new service but it isn’t our agency’s biggest news,” said Chancey. “This summer, I had the pleasure of making a presentation to our county commissioners that ridership has increased more than 150% since I joined the department.”

Why the large increase?

“The increase has been across the board,” said Chancey. “I took the existing system and radically transformed it. The system’s functionality changed, making it more appealing for people to use.”

Why do you like transit planning consultant Jarrett Walker?

“Walker brings a common sense approach to transit,” said Chancey. “He was the first one to articulate it, breaking transit down to its simplest form. Provide mobility through transit and people will buy it.”

What else about the RVCL?

“The RVCL is a three-year demonstration project funded by the Middle Rogue Metropolitan Planning Organization,” said Chancey. Those funds passed down from the Congestion Mitigation and Air Quality Improvement (CMAQ) Program.

What’s next in store?

“My goal is to ultimately meet the Federal Transit Administration criteria required for additional federal funding under the Small Transit Intensive Cities program,” said Chancey. “Only one system in Oregon — the Corvallis Transit System — meets some of the criteria today, so I’ve got my work cut out for me.”

“I hate to say it but I love our transit system the most,” said Chancey. “We don’t do everything perfectly but we’re on the right track. I’m pretty proud of that.”

Chancey recently traveled to Arizona, where he rode the new Sun Link streetcar, part of the Sun Tran system.

“That’s one I’m watching, not because I’m a big fan of streetcars, but because it was a controversial project and I found it unique,” said Chancey. “I’m interested to see how that project progresses and to see the impact on the downtown core in terms of transit use and redevelopment.”

Paige Townsend is the Senior Planner at RVTD, where she oversees short- and long-range planning. However, the title belies her responsibilities as she manages the marketing department, the Transportation Options (TO) program and support services. She’s also in charge of grant management.

Didn’t you recently attend a TO policy meeting in Salem?

“Yes, I’m RVTD’s liaison for federal and state public transit programs that provide not only funding but also advice for our agency,” said Townsend. “However, a lot of what we do is centered on the area where we operate. As a transit planner I have to understand your geography, major trip generators, demographics and your street system that someone from Eugene wouldn’t know about.”

How much has ridership increased since adding evening and Saturday service in 2012?

“We served 1.4 million passengers in 2013,” said Townsend. “That was a 16% increase in ridership. Quite a few people shared with us that they’ve been able to extend their day instead of rushing home after work. Our passengers can go shopping, run errands and attend evening classes at Southern Oregon University.”

What’s next for these services?

“The evening and Saturday service is funded by another three-year demonstration project like RVCL,” said Townsend. “We needed to identify funding. RVTD is looking at its first increase in public funding in more than thirty years. If the November levy passes, we will be able to maintain weekday evening and daytime Saturday service and add two additional routes.”

What else lies ahead?

“We’re looking at an express service for Highway 99,” said Townsend. “We’re just starting the long-range planning with a tentative launch for 2020. This past year, we did a community engagement process that identified one of the primary reasons why people do not use the transit service: it takes too long. We want to fix that. We’re proposing an express service that gets you from Ashland to Medford in 30 minutes.”

“Zion National Park offers a free transit service using a propane-powered shuttle fleet that takes visitors up to the hiking trails,” said Townsend. “The park faced traffic, parking and air quality issues that led to restricting cars and commercial buses in favor of transit. Their problem is a good example of what we are experiencing in our congested cities.” 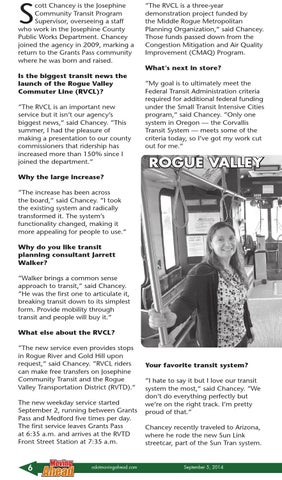