Most afternoons, long backups on the northbound Interstate 5 off-ramp at Merlin’s exit 61 are not uncommon. The close proximity of Highland Drive exacerbates a growing traffic problem for Merlin-area commuters returning home from Grants Pass.

A $2.2 million project, scheduled to begin construction in summer 2015, will make safety improvements at the northbound off-ramp and the local roadway. ODOT expects to have a contractor on board next spring with construction underway by June.

“The Merlin interchange project has been in the planning phase for several years,” said Project Information Specialist Gary Leaming. “It’s good to see it finally go to bid early next year.”

According to Leaming, the improvement project will build a second northbound lane near the end of the exit 61 off-ramp and an additional westbound lane on Merlin Road between the off-ramp and Monument Drive.

Traffic signals
Additionally, the interchange safety project will construct a right-turn lane on Merlin Road to Monument Drive and install new traffic signals at the end of the northbound off-ramp.

“These safety improvements will reduce the frequency and length of backups on the northbound exit 61 off-ramp,” said Leaming. “Merlin used to be a rural interchange but the higher traffic volumes now warrant a traffic signal.” 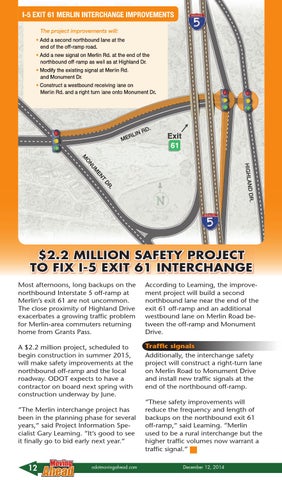