Even with winter’s colder temperatures and wetter conditions, construction on the Fern Valley Interchange project continues unabated in and around Interstate 5 exit 24.

In addition to the construction of Oregon’s first Diverging Diamond interchange, the project realigns North Phoenix Road between Peterbuilt Motors and Home Depot.

The design also helps keep traffic congestion to a minimum while increasing safety.

“The Diverging Diamond design provides higher capacity to move traffic while, at the same time, reducing right of way needs,” said ODOT Public Information Officer Gary Leaming. “Drivers will move to the opposite side of the road to enter I-5 or to cross it. This movement reduces the number of signal phases a driver needs to clear.”

Construction work is focused on two new bridges that span I-5 and Bear Creek. Prime contractor Hamilton Construction of Springfield set bridge beams over I-5, necessitating detours for interstate traffic. Nineteen concrete beams were placed over each direction of I-5.

Bridge beams were set on the first half of the Bear Creek Bridge last October. Construction now is focused on tying the steel to the bridge deck in preparation for a spring deck pour.

In 2015, construction will extend for the first time west of the Bear Creek Bridge toward Oregon 99 and Bolz Road. The precursor of that construction work is the installation of a new water line for the City of Phoenix before roadwork construction can begin. Oregon 99 will also be widened to accommodate turn lanes, bike lanes and sidewalks.

Grove Road
Wet fall weather hindered the opening of Grove Road and the new North Phoenix Road alignment behind the Home Depot, even though much of the road construction and sidewalks are complete.

The closure of the existing North Phoenix Road in front of the Home Depot will follow. That phase will allow Hamilton Construction to essentially bridge the gap and connect the new I-5 bridge.

“Once the temporary northbound on-ramp opens, the project focus in the interchange area is completing the new bridge spanning I-5,” said Leaming.

“The traffic simulation video makes it much easier to explain how the new Fern Valley interchange will operate,” said Leaming. “From our project outreach during the South Medford Interchange project, we learned that a picture or, in this case, a video, is worth a thousand words. Once people see it, people get it.”

Work Zone Safety
I-5 drivers are benefitting from many safety features in the Fern Valley Interchange project work zone. Beyond cones and barrels, the project employs TripCheck traffic cameras, the Rogue Valley’s first Incident Response vehicle, and transverse rumble strips that have been built into the temporary southbound off-ramp to notify drivers of the upcoming tight, 20 mph curve before reaching the signalized intersection.

“Studies show that driver inattention is the biggest factor in work zone crashes.”
Oregon State Police patrols the work zone. Traffic fines double in work zones, even though there are no workers present.

Bear Creek Bridge and Greenway
The Bear Creek Greenway crossing was temporarily replaced at grade with Fern Valley Road because of the bridge construction.

Although designed to promote safety, relieve congestion and improve connectivity, state highway projects are often vilified as disruptive, headache-inducing challenges for drivers and local businesses. What most people don’t realize is that short-term, high-intensity construction projects like the Fern Valley Interchange are also major business generators.

After winning the project bid, prime contractor Hamilton Construction of Springfield established accounts with nearly 40 suppliers and subcontractors in the Phoenix area.

So far, Hamilton Construction has spent roughly $1.9 million on materials, such as concrete and rebar and about $260,000 on supplies.

Additionally, construction workers eat at local restaurants like Si Casa Flores and sleep at local motels or RV parks, such as America’s Best Inn and Suites.

“People have been real responsive to help us out,” said Hamilton Construction Project Manager Chris VanderPloeg.

VanderPloeg estimates Hamilton Construction’s expenditures on the Fern Valley project will probably double before construction wraps up in 2016. 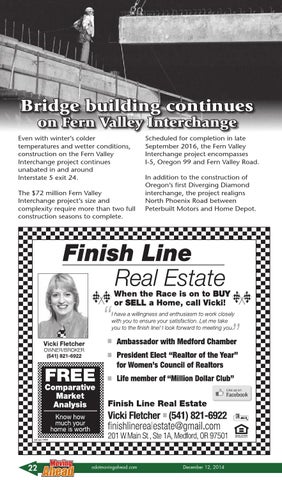