The Oregon 99 Corridor Study, a comprehensive plan for the from south Medford to north Ashland, will go before Jackson County, Ashland, Talent, Phoenix and Medford for approval in early 2015.

Started in 2010, the Oregon 99 Corridor Study is being used to discover ways to enhance transportation safety and capacity over the next 20 years. The study’s Technical Advisory Committee (TAC) is comprised of representatives of local jurisdictions, including Jackson County, Ashland, Talent, Phoenix and Medford.

“The next step is to produce a final draft, take it to Jackson County and the Rogue Valley communities along the corridor for adoption in their Transportation System Plans (TSPs),” said ODOT Planner Ian Horlacher.

Last summer, the TAC received input from local residents, business owners and commuters who live, work and drive along Oregon 99.

“We’ve tried to find a balance for the operation of the highway, which is also Main Street for these communities,” said Horlacher. “Much of that balance is tied directly to safety issues.”

Traffic volumes along Oregon 99 decreased over recent years due to the recession, technological advancements and other social changes. However, with 15,000-17,000 vehicle trips per day along the corridor, Oregon 99 needs safety and capacity improvements. During the 2005-2009 timeframe, 308 traffic crashes were reported along the section of Oregon 99 being studied. Most crashes were rear end collisions or involved vehicles making left turns.

“There is no one project solution for the entire corridor but there are options for many different improvements,” said Horlacher. “Some of the improvements the TAC has identified include better access and signage to the Bear Creek Greenway.”

According to Horlacher, the improvements are relatively low cost because there is no need for right of way purchases. 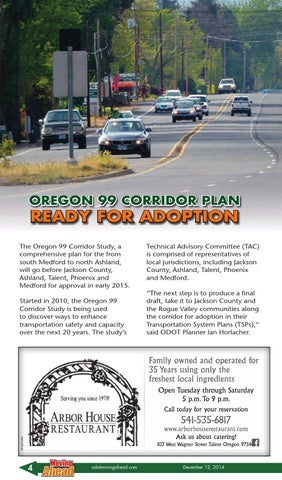