Just two months into its three-year demonstration project, the Rogue Valley Commuter Line (RVCL) service is attracting an enthusiastic, growing customer base for the round-trip bus service from Grants Pass to Medford.

According to Scott Chancey, the Josephine Community Transit Program Supervisor, the RVCL nearly reached 2,200 boardings over the first two months of service.

“The response from the entire Rogue Valley has been overwhelmingly supportive,” said Chancey. “I appreciate everyone’s help, especially from RVTD, in starting this service and look forward to its continued success.”

RVCL averages 51 boardings per day but has already reached a single-day high of 115 passengers. The early figures break down to 500 boardings originating in Grants Pass, 76 in Rogue River, 38 in Gold Hill and 560 in Medford. The 11:05 a.m. run shows the highest ridership, followed by the 3:15 p.m. service.

“My goal when we started the service was to average 100 boardings per day, so we’re halfway there,” said Chancey. “I plan to do a big media push for the winter term of Rogue Community College as well as launch other marketing efforts.”

The Middle Rogue Metropolitan Planning Organization funds RVCL with monies passed down from the federal Congestion Mitigation and Air Quality Improvement (CMAQ) Program. The CMAQ program provides a flexible funding source to state and local governments for transportation projects and programs to help meet the requirements of the Clean Air Act.

The weekday service provides five trips per day in each direction for $2 per boarding; children 6 and under ride free. Only exact fare is accepted as drivers do not carry change.

Free transfers can be made to the JCT and RVTD routes with a valid RVCL transfer ticket within one hour of deboarding. For more information, call the JCT office at 541-474-5452, ext. 2. 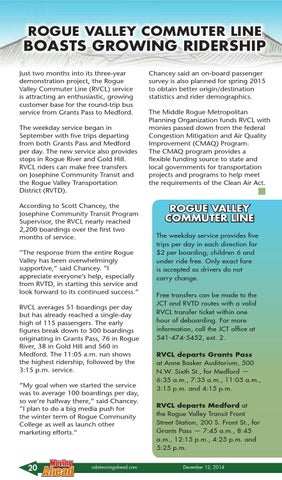