Safety upgrades are on the horizon for the busy intersection of Oregon 62 and 140 in White City. According to ODOT District Manager Jerry Marmon, the $1.4 million safety project will begin construction in summer 2015.

“The Oregon 62-Oregon 140 intersection ranks high on our crash list,” said Marmon. “During 2007-2011, 30 crashes were reported with most being rear-end crashes. Turning crashes or failing to yield right of way were the next highest types of crashes.”

“We’ll also make improvements to the current shared though lane and left-turn lane for westbound traffic,” said Marmon. “And we’ll widen the east and west approaches to the intersection of Crater Lake Highway (Oregon 62) to accommodate dedicated left-turn, right-turn and through lanes.

“This intersection is a priority for us. We’re looking forward to this safety upgrade.” 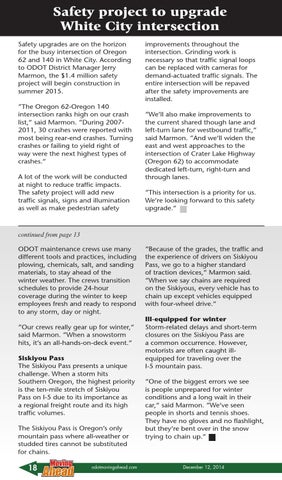