Once the facility plan is finished, the project will transition into an environmental study. The City of Medford and the Federal Highway Administration partnered with ODOT to select the project consultant.

“We’ll probably have a scope of work for the facility plan by next spring,” said ODOT Principal Planner Lisa Cortes. “There’s a lot of leg work up front because we’re trying to integrate the facility plan with the environmental study.”

The Oregon Transportation Commission (OTC) selected the Medford viaduct environmental study to receive $4 million in discretionary Enhance funding last spring. Enhance funding is a category of the ODOT capital improvement program that focuses on projects that enhance, expand or improve the transportation system. The OTC is a governor-appointed body that establishes state transportation policy and guides the planning, development and management of a statewide integrated transportation network.

“The added investment converted the previously-scheduled facility plan into an environmental study of Medford’s most iconic bridge,” said Cortes. “The Enhance funding allows our agency to prepare a facility plan in conjunction with the National Environmental Policy Act (NEPA) and the project development process.”

“When you start talking about replacement, project costs start at hundreds of millions of dollars,” Cortes said. “It is imperative that we look at improvements at a lower range of costs that optimize public dollars.”

However, the scale of major project concepts, such as a full replacement of the Medford viaduct, or the addition of another deck next to I-5, far exceeds the level of transportation funding expected through year 2020.

Unlike the facility plan, which develops a 20-year vision for the structure and the community, the environmental study goes much deeper, addressing the challenges presented by 52 years of residential and commercial growth around the Medford viaduct.

“The Medford viaduct was originally constructed in 1962,” said Cortes. “Medford looked a lot different back then.” 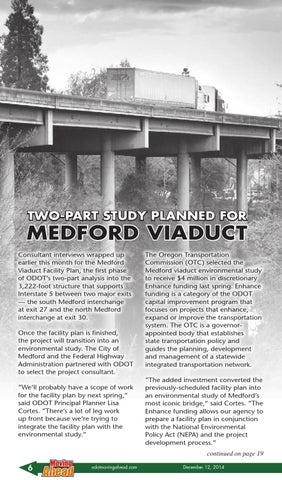