Utility relocations between Poplar and Delta Waters herald the start of major road construction on the $120 million Oregon 62 Expressway project.

The Medford Water Commission and Avista Utilities have been performing day and nighttime work on the south end of the expressway project. The utility work has required lane closures along a busy section of Oregon 62.

“Nighttime is a different scene,” said ODOT Senior Inspector Shawn Daw. “Barrels and flaggers come out once traffic wanes in the nighttime.”

“Utility work is still a construction zone with a definite work area where drivers and pedestrians need to pay attention,” said Daw.

Addressing congestion and safety
The Oregon 62 Expressway project is a multimodal solution that will increase capacity and improve safety along the corridor, a critical business connection for freight, tourism and commuters.

“Higher crash rates at corridor intersections, especially from I-5 to Delta Waters Road, are a safety concern,” said ODOT Public Information Officer Gary Leaming. “Oregon 62 and Delta Waters Road is the busiest intersection in the entire southwest Oregon region. The traffic counts are higher than those at I-5 north of Medford.”

The multimodal project adds sidewalks and transit-related enhancements on the existing Oregon 62 corridor. The project will also build a four-lane access-controlled expressway that provides faster travel and improved safety within and through the region.

The 4.5-mile expressway will start with three lanes of eastbound traffic at Poplar and Bullock Roads near Fred Meyer. Through traffic will turn left on a small directional interchange located across from Whittle Road. Traffic will then travel along a four-lane expressway on the east side of the Medford Airport, span over Vilas Road, and Coker Butte connect to the existing Crater Lake Highway near Corey Road. Traffic destined for commercial centers such as Costco, Lowe’s and Safeway will continue as is done today.

For westbound traffic, three lanes of traffic will extend through the Poplar-Bullock intersection. The existing Hilton Road jug-handle design from Biddle Road will change so that merging traffic will stop before it enters the westbound Oregon 62 lanes.

“Project staging is crucial to keep traffic moving and business access open,” said ODOT Project Manager Tim Fletcher. We expect much of the first phase work will be completed at night or behind solid barrier to limit impacts to traffic.”

In early 2014, Coker Butte-area property owners approached the ODOT project team with an alternative crossing idea that would better connect the properties along the east side of the Medford Airport.

While the Commerce Drive crossing provided the same access to the properties that exists today, it would have a marginal connection to several properties poised for eventual industrial development. The property owners will donate right of way to reduce the cost of the design change, which is estimated to cost about $1.8 million.

“By constructing the minimum extension of Coker Butter that has direct, signalized access to Crater Lake Highway, the project will open those industrial properties to future job opportunities for the Rogue Valley,” said ODOT Region Manager Frank Reading. “The agency’s goal is to build the best design for the money we have. And we’ll do that thanks to the partnership with the property owners, the city and the airport.”

The design change requires a revision to the federally-required Environmental Impact Statement, which pushed back the project bid date to March 2015. 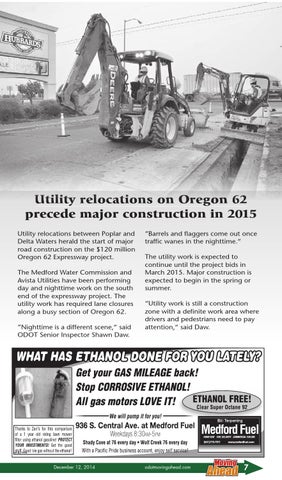