The foundation of success for the $120 million Oregon 62 Expressway project, one of the largest transportation projects in southern Oregon history, can be found in a former pear orchard in Central Point.

Oregon’s first conservation bank was originally developed as an 80-acre parcel of oak savannah, prairie and vernal pools that neighbors land owned by The Nature Conservancy. U.S. Fish and Wildlife approved the ODOT bank in 2008. The two facilities combined
at nearly 225 acres for the largest intact oak savannah ecosystem in southern Oregon.

The conservation bank is permanently protected land managed for endangered, threatened, and other at-risk species. According to ODOT Wetlands Specialist Paul Benton, who manages the agency’s conservation bank, the ODOT site has since grown to nearly 200 acres.

“ODOT and the Nature Conservancy rehabilitated the latest addition to the site, 14 of 116 newly-acquired acres late last year,” said Benton.

In addition to the Oregon 62 project, the conversation bank has been instrumental in developing several transportation projects in southern Oregon, including the $72 million Fern Valley Interchange project in Phoenix.

ODOT’s conservation bank is home to two endangered plants, Cook’s lomatium and large-flowered woolly meadowfoam, and the threatened vernal pool fairy shrimp, an inch-long translucent crustacean related to lobsters and saltwater shrimp. Each of the species occur in vernal pool habitat — small, shallow wetlands that fill with water during fall and winter rains and dry up in spring and summer.

After its use as a pear orchard, the open field was graded in the 1930s, and the last area was heavily grazed for years. Last fall, ODOT spread more than 35 pounds of Cook’s lomatium and woolly meadowfoam seed, along with other native seed grasses. Those seeds are growing and fairy shrimp are populating the area formally leveled by cattle grazing.

According to Art Anderson, Area Manager for the Rogue Valley, local transportation stakeholders acknowledge that the conservation bank continues to be an important tool that benefits crucial transportation infrastructure investments.

“The bank was conceived with a 20-year planning horizon to meet our needs,” said Anderson. “The bank continues to save us a lot of time, especially on our largest, more complex highway projects.” 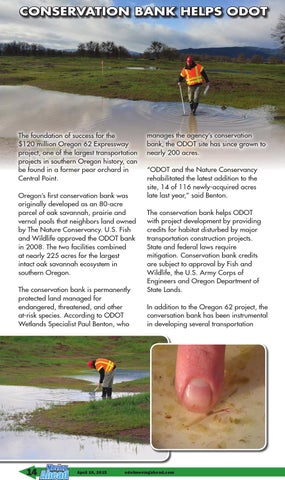