“The Diverging Diamond design provides higher capacity to move traffic while, at the same time, reducing right of way needs,” said ODOT Public Information Officer Gary Leaming. “Drivers will move to the opposite side of the road to enter I-5 or to cross it. This movement reduces the number of signal phases a driver needs to clear.”

In addition to construction of the Diverging Diamond interchange, the project realigns North Phoenix Road between Peterbuilt Motors and Home Depot. The project is scheduled for completion in September 2016.

“This is kind of the summer of action,” said Phoenix Mayor Jeff Bellah. “We have all the freeway work and Fern Valley work going on. [This project] will increase our ability for more growth in the future. We’re pretty excited.”

According to ODOT Project Manager Tim Fletcher, a weekend closure in March was needed to make three important connections on the west side of I-5, including the new North Phoenix Road.

“Traffic is on new roadways and using a new, signalized intersection east of the interchange,” said Fletcher.

Prime contractor Hamilton Construction of Springfield placed new bridge beams during the winter. Work proceeded on the west side of the I-5 bridge approach.

“Little work could be done on the east side approach until traffic was moved onto a temporary northbound on-ramp and new North Phoenix alignments,” said Fletcher.

With the old North Phoenix Road and the northbound on-ramp out of commission, the contractor can remove the old road surface and begin moving the large pile of fill necessary to build up the new eastside bridge approach.

The construction timeline advances for the east and west bridge approaches. By the end of this year, drivers should be on the new I-5 bridge and new on- and off-ramps at Exit 24.
Once traffic is on the new bridge, prime contractor Hamilton Construction will demolish the old, two-lane bridge.

Demolition and construction below the ordinary high water mark can only be completed from June 15 to September 15, the in-water work period set aside to protect fish.

Rebuilding of Oregon 99, Bolz Road and Fern Valley Road continues. This work includes installation of a new water line and storm drain system for the city of Phoenix.

“This may be the most challenging construction phase for the city of Phoenix and local businesses,” said Leaming. “The work is right in the core of Phoenix, alongside businesses and Oregon 99 corridor.”

“The key is to keep traffic moving while ensuring shoppers have access to those businesses,” said Fletcher.  “We’ve been pleasantly surprised so far. We’ve kept disruptions to a minimum, most of which occurred during the installation of a new city water line and utility work prior main construction.”

“The traffic simulation video makes it much easier to explain how the new Fern Valley interchange will operate,” said Leaming. “From our project outreach during the South Medford Interchange project, we learned that a picture or, in this case, a video, is worth a thousand words. Once people see it, people get it.”

Work Zone Safety
I-5 drivers are benefitting from many safety features in the Fern Valley Interchange project work zone. Beyond cones and barrels, the project employs TripCheck traffic cameras, the Rogue Valley’s first incident response vehicle, and transverse rumble strips that have been built into the temporary southbound off-ramp to notify drivers of the upcoming tight, 20 mph curve before reaching the signalized intersection.

Staying close to construction
ODOT opened a temporary construction office within ‘The Shoppes at exit 24’ shopping mall to serve as a base of operations for the project inspectors. The public is welcome to stop by the office for more information. 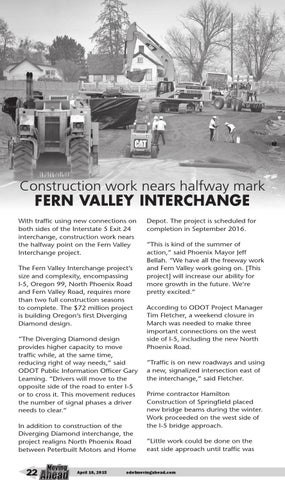