The future is by its nature unknown, but one thing is certain in the transportation industry: it costs a lot of money to maintain our transportation system – not to mention building new capacity or funding projects that expand choices. Since 1993, the price of road and bridge construction and maintenance has more than doubled. Meanwhile, the federal Highway Trust Fund has run out of money. And with more cars becoming highly fuel efficient, revenue from gas taxes is failing to make up the gap – both federally and at the state level.

Over the past decade, Oregon has experimented with ways to address funding shortfalls. A taskforce and several studies considered many options, including raising the gas tax, taxing tires, a flat fee and more. One concept rose up as being the most fair and the most economical: a fee for based on how much you use the road.

Welcome OReGo!
On July 1, ODOT will launch OReGO, the nation’s first operational program that charges motorists directly for their road use. It is the first step toward a future in which technology-enabled pay-for-use methods replace per-gallon fees as the prevailing means to collect money to fund our highways.

It’s no surprise Oregon is the first in the nation to study this alternative in-depth and put it to a real test. The 1919 Oregon Legislature instituted the first gas tax in the country, aimed at “getting Oregon out of the mud.” But it’s been clear for quite some time that the gas tax won’t work going forward: there’s a federal mandate to make cars get better gas mileage – and technology even has cars on the roads that don’t use any fuel at all. While these efforts are great for the environment and help reduce our dependence on oil, they have another large impact: that of reducing both federal and state revenues for transportation. Yet we still want and need our roads.

So nearly a century after the pioneering gas tax was created, Oregon is doing it again: creating a first. The 2013 Oregon Legislature authorized OReGO, the nation’s first per-mile charging system, which will assess a charge of 1.5 cents per mile for up to 5,000 volunteer cars and light commercial vehicles instead of paying the tax at the pump.

Common questions and answers about OReGO

Is this an additional tax?

No. The road usage charge will serve as a replacement for the gas tax, not an additional tax.
Participants in OReGO will receive a credit or refund of gas tax paid while they are in the program. The system will calculate gas consumed, and gas tax paid, as it also calculates the per-mile charge. If the two are equal, the motorist pays nothing. If the gas tax paid exceeds road charges billed, the driver will be eligible for a refund. And if the road charge exceeds what was paid in gas tax, the excess amount will be due from the motorist.

Will state government track my whereabouts with GPS?

No. The law that created OReGO does not require GPS. In fact, it demands that at least one mileage reporting option not use GPS, and that motorists be given choices for the devices and reporting services they will use.

Some consumers are so comfortable with technology they may want the benefits offered by an option that does include GPS technology. For example, if you drove out of state, the miles would be automatically recognized as not billable. Other folks are not as comfortable, and will exercise their choice to not use GPS.  Either way, ODOT will only use information that counts miles.

Is this program unfair to rural Oregonians?

No. Some say a per-mile charge would be unfair for rural drivers because they must drive longer distances to do basic things such as go to work, school, and the store. But the truth is, Oregon motorists already pay a distance-based tax—the current fuel tax.

Doesn’t it create a dis-incentive to owners of fuel-efficient vehicles?

No. In ODOT’s focus group research (2012-13), electric vehicle owners tended to be in favor of road use charging. They appreciated the fairness of the model as they voiced their concern for maintaining our roads (on which to drive their new vehicles). They agreed that motorists should fairly pay for the roads they use.

While a road charge would be a new bill for EV and alternative fuel-powered vehicle owners to pay (instead of paying gas tax at the pump, as they did with their old car), savings in fuel consumption far outweighed the prospect of a road charge.

Some say a government-run system is certain to run poorly and cost a lot of money.

A new program will cost more initially – especially compared to the current setup, with a system that’s been in place for decades. Today, to collect Oregon fuel taxes it averages about 0.5% of revenue, and that figure reflects a fully operational, mature program with three million vehicles.

Operating costs for OReGO will start out high, especially with just a few thousand participants, but it has potential, and that’s one reason we are using private vendors. They will manage collection, and that will reduce system costs over time.

As the number of participants grows and the market for value-added services expands, costs will decline substantially. ODOT estimates when the number of road usage charge payers reaches one million, operating costs will drop to below five percent of gross revenues per month.

The OReGO model could be a glimpse into the not-so-distant future, with “connected cars” and other technology driving things in a way we can’t even imagine. We do know from our past experience that a road usage charge program offers a way to equitably assess fees based on the value a motorist gets from the public infrastructure.

As it stands, the gas tax is becoming obsolete. Over time, older vehicles will phase out and the entire fleet of vehicles will become highly fuel efficient, vaporizing the main way we collect revenue to care for the transportation system. OReGO is a fair and sustainable funding model that will ensure our roads are maintained safely for every motorist well into the future. 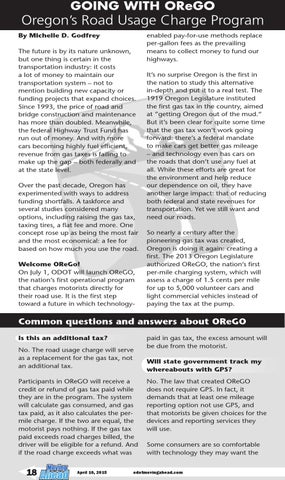