Anticipation is building for the official start of the $120 million Oregon 62 Expressway project, one of the largest transportation projects in southern Oregon history.

According to ODOT Area Manager Art Anderson, the project team is working on last-minute details for the Coker Butte crossing redesign that involves work with the Federal Aviation Administration and the Rogue Valley International-Medford Airport.

“The right of way process is always the critical path to the project package,” said Anderson. “We anticipate getting this project advertised for construction bidders and underway later this year.”

Utility relocations along the Oregon 62 corridor have dominated much of the preparation work over the past year. Most of that work was completed at night to reduce impacts to traffic. Rogue Valley Sewer Service and other utility relocations are currently taking place on airport property, signaling the first phase of the construction project.

The Oregon 62 Expressway project is a multimodal solution that will increase capacity and improve safety along the corridor, a critical business connection for freight, tourism and commuters.

“Higher crash rates at corridor intersections, especially from I-5 to Delta Waters Road, are a safety concern,” said ODOT Public Information Officer Gary Leaming. “Oregon 62 and Delta Waters Road is the busiest intersection in the entire southwest Oregon region. The traffic counts are higher than those at I-5 north of Medford.”

The multimodal project adds sidewalks and transit-related enhancements on the existing Oregon 62 corridor. The project will also build a four-lane access-controlled expressway that provides faster travel and improved safety within and through the region.

For westbound traffic, three lanes of traffic will extend through the Poplar-Bullock intersection to the north jug-handle to Biddle Road. That traffic from Biddle Road will change so that merging traffic will stop before it enters the westbound Oregon 62 lanes.

“Project staging is crucial to keep traffic moving and business access open,” said ODOT Project Manager Tim Fletcher. When it is on the heavily-traveled corridor between Poplar and Delta Waters Road, it will either be at night or behind solid barrier or both to limit impacts to traffic. 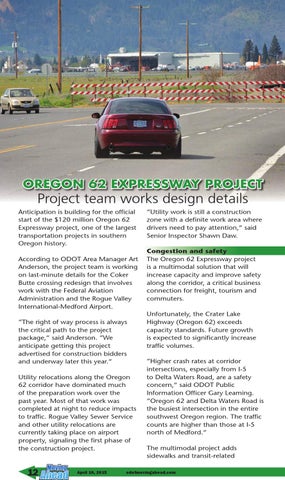