The first phase of the Siskiyou Safety Rest Area and Welcome Center along Interstate 5 is expected to break ground later this summer.

Construction of the facility’s roadways and ramps is expected to go to bid later this spring. The project has overcome several challenges and delays over the past two decades to reach the groundbreaking milestone, hurdling land use applications, criticism from residents of the nearby Oak Knoll neighborhood, and development issues that included water, sewer and environmental permits.

ODOT closed the Siskiyou rest area for safety reasons in 1997. The old site had a history of fatal crashes because it was located on a six-percent grade. After the closure, ODOT began working with the local community and tourism agencies to build a new rest area.
“We looked up and down the northbound I-5 corridor in southern Jackson County for an appropriate, safe location for the rest area,” said ODOT Area Manager Art Anderson. “The Federal Highway Administration expects ODOT will build a new rest area to serve travelers coming off the Siskiyous.”

According to Anderson, the Ashland’s City Council recently approved water and sewer for the facility contingent on an intergovernmental agreement. The city had previously approved to extend services in 2011 as long as the project was completed within four years. The new vote removed that time requirement.

Designed to serve as Oregon’s signature visitor facility, the Siskiyou Safety Rest Area and Welcome Center will be constructed alongside the northbound I-5 lanes, approximately two miles south of Ashland Exit 14.

Traffic statistics show that more than three million vehicles travel north on I-5 from California to Oregon each year. According to the Oregon Tourism Commission, every dollar spent operating a welcome center equates to $41 in visitor spending.

The facility will house a welcome center, an outdoor kiosk, restrooms and an office for Oregon State Police troopers. Commercial truck traffic will not use the facility. A restroom has already been constructed at the Ashland Port of Entry station, located between Ashland Exits 14 and 19.

The project’s second phase, scheduled to begin in 2016, will build two Cascadia-themed buildings for the rest area. The Cascadia designs would add to the facility’s gateway look for visitors. The environmentally-friendly design and sustainable ethic will match that of the Welcome to Oregon sign and the new interchange aesthetics recently constructed at Ashland Exits 14 and 19. 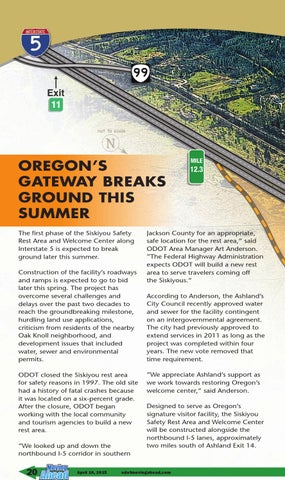