Safety project to untangle backups at I-5 Exit 61

Northbound commuters who travel back and forth from Grants Pass to Merlin will trade a short-term inconvenience — a five-day detour for construction after Memorial Day Weekend — for a permanent solution to the long, afternoon backups so common at the northbound Interstate 5 off-ramp at Exit 61.

“We know closing the northbound off-ramp for five days will be a huge hassle,” said ODOT Project Information Specialist Gary Leaming. “The project team worked to find a time for the closure that would cause the least impact on the business community, especially summer recreation businesses that rely on the Rogue River.”

“June worked out best for the detour because it is right before school ends and just before the summer heat kicks in,” said Leaming.

Leaming said that commuters are likely to use Highland Avenue as the detour since it parallels I-5. However, the project’s official detour will direct travelers further north to Hugo Exit 66 and back south to Merlin.

“Commercial haulers will need to follow the official detour,” said Leaming. “Everyone else will find the path of least resistance.”

During the five-day detour, two lanes will be built at the end of the northbound off-ramp.
The construction work is part of a $2.2 million project to make safety improvements at the off-ramp and the local roadways.

“Merlin used to be a rural interchange but the higher traffic volumes now warrant a traffic signal,” said Leaming. “These safety improvements will reduce the frequency and length of backups on the northbound Exit 61 off-ramp.” 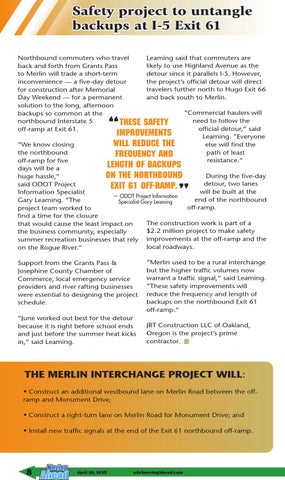