A pavement overlay project in Shady Cove will see its construction schedule pushed back an additional year. ODOT now targets 2018 for the start of work on Oregon 62.
The Oregon 62 overlay project
will extend north from the Rogue River Bridge to Cleveland Street in Shady Cove.
In addition to a new roadway surface, the construction project will build a center turn lane, bike lanes and sidewalks. The city of Shady Cove plans to install a new water line in the project area and a right turn lane on Rogue River Drive.
ODOT Area Manager Art Anderson also cited workload issues caused by staffing cutbacks as another cause for the project’s delay.
“The good news is that the project is fully funded and we’re confident we can deliver,” said Anderson. “We anticipate all of the work can be completed in a single construction season.”
Anderson and ODOT Roadway Designer Brian Sheadel briefed the Shady Cove City Council on the latest project developments in March.
Hoping to make their community more attractive for residents and visitors alike, city leaders collaborated with ODOT to add enhancements to the project. Recreational motorists headed to the upper Rogue River travel through Shady Cove on Oregon 62.
“Our project team thought it made sense to see if we could attach funds specifically targeted for bicyclists and pedestrians,” said ODOT Project Information Specialist Gary Leaming. “The need is there to keep people off the highway and shoulder, especially children walking to school.
Project planning began in 2012 with an initial scoping meeting and briefing to the Shady Cove Chamber of Commerce. ODOT has focused on keeping construction impacts to a minimum not only for the businesses but also for the project budget. 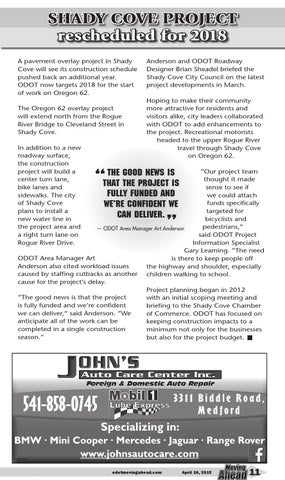