Commuters transitioned to the first half of the new Bear Creek Bridge earlier this month when prime contractor Hamilton Construction reached another major construction milestone on the $72 million
Fern Valley Interchange project at Interstate 5 Exit 24.

The project addresses traffic congestion that is especially severe in and around Phoenix’s I-5 interchange during morning and evening commutes. Existing and proposed development along the east side of I-5 in Phoenix had reduced the capacity and created safety issues at the interchange.
The project area includes I-5, Oregon 99 and Fern Valley Road.

“The Diverging Diamond design provides more traffic capacity,” said ODOT Project Manager Tim Fletcher. “To enter I-5 or cross over it, drivers will move to the opposite side of the bridge, which reduces the number of signal phases a driver needs to clear.”

“Once we open the first half of the new Bear Creek Bridge, work will focus on demolishing the old, two-lane structure,” said Fletcher. “By the end of this year, we expect drivers will using the new I-5 bridge and new northbound on- and off-ramps at Exit 24.”

The Fern Valley Interchange project’s size and complexity, encompassing I-5, Oregon 99 and Fern Valley Road, requires more than two full construction seasons to complete. In addition to construction of the Diverging Diamond interchange, the project realigns North Phoenix Road
between Peterbilt Motors and The Home Depot.

Demolition and construction below the ordinary high water mark can only be completed during the summer, from June 15 to September 15, an in-water work period set aside to protect migrating fish.
The project is scheduled for completion in September 2016.

Challenging Phase Awaits
Hamilton Construction and subcontractors are at several locations on both sides of I-5, including Oregon 99, Bolz Road and Fern Valley Road.

West of the Bear Creek Bridge, paving and curb work is nearly finished, which will open the south side of Fern Valley Road to construction, encompassing Bolz Road and the area adjacent to the new Chevron gas and store on Oregon 99.

“This work will be the most challenging construction phase for the city of Phoenix and local businesses,” said Fletcher. “The work is right in the core of Phoenix, alongside businesses and the Oregon 99 corridor.”

To reduce work zone crashes, the I-5 speed limit is reduced to 50 mph in the work zone.
“Road conditions change as needed for construction,” said Fletcher. “Travel lanes were narrowed and there have been several different ramp configurations. Additionally, workers and vehicles are coming on and off the job site.”

Oregon State Police patrols the work zone. Traffic fines double in work zones, even when there are no workers present.”

ODOT includes construction changes in its weekly construction report. More specific changes, including explanatory videos, are highlighted in a separate Fern Valley Construction update. Sign up for these updates at: https://public.govdelivery.com/accounts/ORDOT/subscriber/new?

To date, Hamilton Construction has spent more than $3.8 million on materials such as concrete and rebar and about $360,000 on supplies.

Additionally, construction workers eat at local restaurants like Si Casa Flores and sleep at local motels and RV parks, such as America’s best Inn and Suites.

“As the project continues to develop, we find the need to reach out to more local businesses and vendors,” said Hamilton Construction Project Manager Chris VanerPloeg.

Design Phase and Funding
The design phase began in 2004. The Fern Valley Through design alternative was eliminated in 2009 because it would have an adverse impact on nearby farm land. The Project Development Team later unanimously supported the North Phoenix Through build alternative as part of the federally required environmental assessment.

“The JTA investment was great news,” said ODOT Area Manager Art Anderson. “A major investment like that reflects the excellent work accomplished in the Rogue Valley.”

Bridge Aesthetics
Aesthetic features inspired by the hills and grasses — the natural colors surrounding Phoenix — are being incorporated in the final design for the new Fern Valley Interchange project.

The utilization of concrete form liners and different stains and paints presents opportunities to design a bridge with a local look instead of the drab concrete structures common when I-5 was initially built.
The project team filtered through several designs with the help of Medford landscape architect, John Galbraith, before selecting aesthetics for the Fern Valley Road bridges that span I-5 and Bear Creek at exit 24. 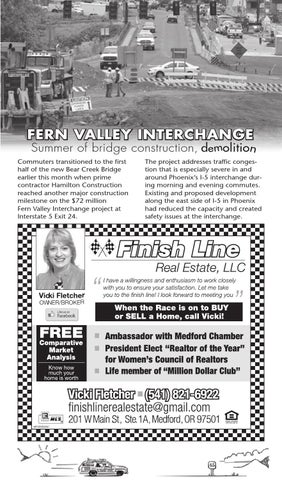