Prime contractor Knife River is heading a $1 million safety improvement project at the intersection of Oregon 62 and Oregon 140.

Nighttime construction began earlier this month with lane closures in effect from 7 p.m. to 7 a.m. ODOT scheduled the work at night to avoid the heavier traffic volumes recorded during daylight hours.

Construction is expected to be completed by the end of the summer.

Currently, both westbound and eastbound traffic on Oregon 140 has no dedicated left-turn lane. Drivers can become confused by drivers’ movements in the opposite lane.

“This location has been on our safety list for years,” said ODOT District Manager Jerry Marmon. “We’ve had intersection crashes, even a pedestrian fatality, so we’re looking forward to making this key intersection safer.”

According to Marmon, the Oregon 140/Oregon 62 intersection is listed among the top five percent of crashes in southwestern Oregon for the same type of roadway. Thirty crashes were reported at this location from January 2007 to January 2011.

“This project will add several operational improvements to this area that will reduce the crash frequency and improve safety for everyone,” said Marmon. 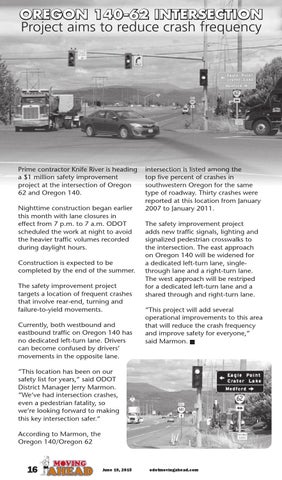