The $4.9 million project includes Cave Junction’s lane conversion project, which converts the number of through traffic lanes from four to three, including a two-way, left turn lane. The design adds bicycle lanes on both sides of the Redwood Highway and improves pedestrian access along a half-mile section in the city limits.

The project also added rumble strips to the centerline along the 15-mile stretch of new pavement.
Now all that’s left is striping work.

“Redwood Highway from Grants Pass to Cave Junction has a higher-than-normal rate of drivers who simply run off the road,” said ODOT District Manager Jerry Marmon. “Improving the pavement and installing the rumble strips should help alert drivers to keep it between the lines.”

Next year, another paving project will launch from where this one ends near Slate Creek, continuing north on the Redwood Highway to the Applegate River Bridge, which is located west of Grants Pass.
The genesis of the lane conversion design came about during Cave Junction’s Transportation System Plan (TSP) update. Cave Junction began its TSP update after receiving a Transportation & Growth Management (TGM) planning grant from ODOT.

“TGM grants provide money to help local governments plan for their future needs,” said ODOT Planner John McDonald. “The TSP is even more beneficial when there is a project scheduled for construction within the next few years. Cave Junction is working with ODOT to make that project better for everyone.”

“Our biggest traffic complaint is speeding through town,” said Nolan. “We are appreciative of the ways ODOT has worked with us to help slow traffic down.”

ODOT worked with Cave Junction to identify potential improvements that would address local concerns. After examining traffic patterns, volumes and collisions, Cave Junction and ODOT determined a lane conversion would solve a lot of problems.

“Changing this to a three-lane section with a center turn refuge will lower the crash rate,” said ODOT Traffic Engineer Dan Dorrell. “It will also make downtown Cave Junction more livable, and safer for cyclists and pedestrians.”

On any given summer day, or any time of the year, there’s plenty of pedestrian traffic.
The city led discussion with the public. City staff hosted open houses and shared the design concepts at public art walks and city council meetings.

“The lane conversion design is a win for all,” said McDonald. “Businesses will have improved access and drivers, bicyclists and pedestrians will all reap the travel and safety benefits.” 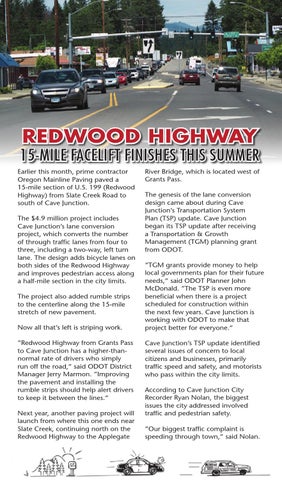