Are you at risk?

“Pedestrians have a responsibility to pay attention,” said Allison. Pedestrian-related fatalities now account for more than 16 percent of Oregon’s traffic deaths. “Right or wrong, a pedestrian who gets hit will experience the more traumatic event in a crash.”

Of course, drivers need to focus on the road and only the road. Allison said her officers see drivers distracted by more than just cellphones.

“You would be surprised, people drive as they watch YouTube,” said Allison, who served 17 of her more than 20 years in law enforcement in Central Point. “People are so addicted to that stimulation they have the tablet running right next to them in the front seat.

“A lot of the time, when you take your eyes off the road, you drive to where your eyes go.”

With Oregon’s experiment with legal marijuana underway, Oregon State Police is prepared for more DUII situations involving a combination of alcohol and drugs.

“One of our biggest problems is impaired driving — alcohol, marijuana, prescription drugs or something else,” said OSP Sgt. First Class Jeff Proulx, who works at OSP Central Point Area Command and is approaching his 20th year of service.

Proulx recommends you pull over and call 911 to report behaviors you suspect are impaired driving. Those tips help OSP locate drivers and find probable cause.

“You have to be a more diligent, defensive driver than you were in the past,” said Proulx.
“National statistics demonstrate one of every 10 drivers is impaired,” said Proulx. “If I stop, say, 15 vehicles, I can be pretty sure one driver shouldn’t be on the road.”

When a driver sends or receives a text message, she takes her eyes off the road for about 4.6 seconds. At 55 mph, she’s driving blind across a football field.

“Smartphones are at the core of a lot of crashes,” said Grants Pass Police Chief Bill Landis. “You can simply pick up your phone and have a crash.”

Landis, a 25-year veteran with the Grants Pass Police Department, said distracted driving is a factor more often than not. There are four types of driving distractions: Visual – looking at something other than the road; Auditory – hearing something not related to driving; Manual – moving your hands from the wheel; and Cognitive – thinking about something other than driving.

“Not every investigation provides evidence needed to cite distracted driving as a contributing cause,” said Landis. “With newer model cars, sensors provide valuable information for crash reconstruction. With older vehicles, we’re left to old-fashioned reconstruction to determine cause.”

“Nowadays, everyone and their uncle drives with a cellphone in their hand,” said Medford Police Chief Tim George. “What’s the reason we’re seeing more crashes? I suspect distracted driving is number one.”

Drawing from his personal experience, George recommends parents do their young drivers a big favor by making a steadfast rule: put the cellphone in the back seat when you drive.

“As a parent, you have to be a risk manager,” said George. “For example, you can also reduce your child’s risk of a crash by making sure they are off the road during the DUII hours. That’s a dangerous time to drive for everyone.”

The DUII hours, generally recognized as from midnight to 4 a.m., are as much a part of the law enforcement vernacular as amateur nights, law enforcement slang for events like New Year’s Eve, the Super Bowl, and St. Patrick’s Day, when officers see a sharp increase in impaired driving. 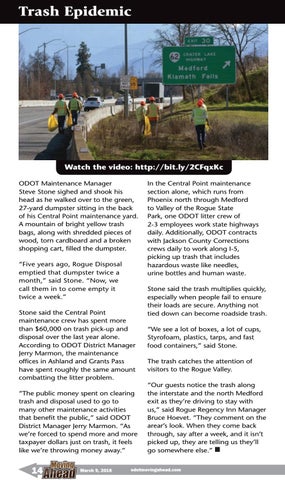