Bybee Corner, the local name for the intersection of Oregon 238 and West Main Street, continues to stymie ODOT engineers.

Significant improvements to sight distance and road geometry were completed in 2005. Two years ago, the right-turn lane was lengthened for motorists travelling from Jacksonville, a concrete median was added to better separate the turning lane, and the location of stop bars was adjusted on West Main Street.

Prior to the 2005 project, the Bybee Corner intersection was listed among the top 5 percent in Oregon for crash frequency and severity on the Safety Priority Index System (SPIS). Ae expected, crash rates decreased following each safety improvement.
So, why is the crash rate rising again?

Engineers are perplexed by the rising crash rate, which is happening in spite of the relatively good sight distance at the Bybee Corner intersection.

Roberts developed an online survey to gather input and experience from the people who regularly travel through the Bybee Corner intersection. Survey results will be considered before more adjustments to the intersection are planned.

“We’d like to know first-hand what drivers are experiencing,” said Roberts.

The former Jacksonville resident was involved in a 2010 crash. As Corbin approached the intersection, a southbound driver, wanting to turn onto West Main Street, turned in front of him.

“There is some confusion on who has the right of way at that intersection,” said Corbin, who suffered from back and neck injuries and underwent two years of physical therapy.

Corbin said the other driver told him, incorrectly, he thought he had the right of way.

Corbin acknowledged the Bybee Corner intersection is better than before but said there are still a number of distractions and he’s concerned about speed, especially from vehicles traveling from Central Point.

“They will pull out from West Main and, before you know it, someone will be on your bumper,” said Corbin.

Previous projects
The 2005 safety project resulted in the Bybee Corner intersection dropping off the top 5 percent SPIS list. Prior to construction of the 2013 project, a safety audit found westbound drivers turning onto West Main Street did not have enough time to discern oncoming driver intent. The resulting project was completed within state right of way for $150,000.

“There is either something with driver behavior or the engineering of the intersection that is a problem,” said ODOT District Manager Jerry Marmon. “It’s frustrating for us because we want to make the intersection as safe as possible.”

Tell us what you think
Do you regularly travel on Oregon 238 and use the Bybee Corner intersection? ODOT wants to hear your experiences and suggestions on how to improve safety.
Use this survey link to share your experience: www.surveymonkey.com/r/ZQJ66DK. 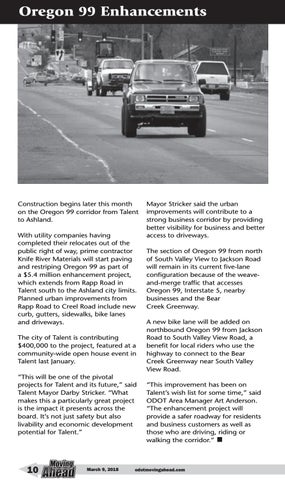