After a summer of flagging and roadwork construction, the people who travel through the Merlin interchange at Interstate 5 Exit 61 are seeing the light.

Poles for new traffic signals arrived from manufacturing facilities located along the East Coast earlier this month. Electricians are currently installing the wiring into the erected poles and mast arms.

The $2.2 million project improves safety and operations to the rural interchange, specifically the I-5 off-ramp and local roadways connected to the interchange. JRT Construction LLC of Oakland, Oregon is the prime contractor.

The project will end back-ups on the northbound off-ramp, which frequently extend back to the I-5 travel lanes, as well as provide needed safety improvements for the next 20 years of operation.

“Merlin is still very much a rural interchange but the higher traffic volumes now warrant a traffic signal,” said ODOT Project Manager Ted Paselk. “These safety improvements will reduce the frequency and length of backups on the northbound Exit 61 off-ramp.”

Travelers are currently experiencing traffic delays and 24-hour flagging at the intersection of Merlin Exit 61 and Monument Drive as work focuses on the roadway and traffic signals.

However, the single biggest inconvenience to drivers occurred during a week-long closure before the Memorial Day holiday. The closure was necessary to rebuild and widen the northbound off-ramp.

One of the major goals was to get the most disruptive work out of the way before the busy summer tourist season. The Merlin interchange is the gateway to the lower Rogue River recreation areas. Those destinations include Galice, Indian Mary Campground and the beginning of the Wild and Scenic portion of the Rogue River.

An open house was held at Fleming Middle School to address concerns about the impact on summer tourism along the Rogue River.

“With a few exceptions, folks were appreciative of the construction and the need for improvements to the interchange,” said Paselk. 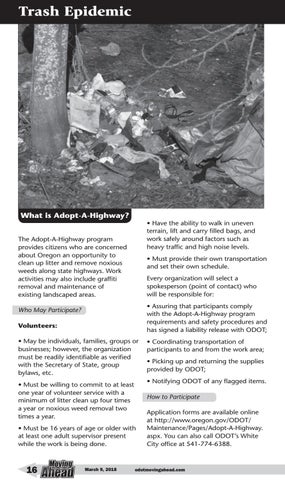