Construction is wrapping up on a $1 million safety improvement project in White City that targets a location of frequent crashes involving rear-end, turning and failure-to-yield movements. The location is at the intersection of two state highways, Oregon 140 and 62.

Currently, both westbound and eastbound traffic on Oregon 140 has no dedicated left-turn lane.

“This location has been on our safety list for years,” said ODOT District Manager Jerry Marmon. “We’ve had intersection crashes, even a pedestrian fatality, so we’re looking forward to making this key intersection safer.”

The intersection of Oregon 140 and Oregon 62 is among the top 5 percent of crash locations in southwestern Oregon for the same type of highway. Thirty crashes were reported at this location from January 2007 to January 2011.

“When the project is completed, Oregon 140 will have a dedicated left turning phase, just like the Oregon 62 side of the intersection, so everyone will be able to drive through the intersection more safely than before,” said Marmon.

“We construct these water quality detention ponds, or bio swales, to hold the water runoff from the pavement and allow any roadway sediments to settle in the ponds before it gets into the streams,” said Marmon. 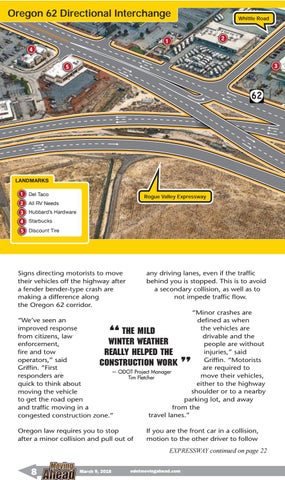