After a decade of developing plans, filing permits and completing right of way purchases, the first phase of the $120 million Oregon 62 Corridor project goes to bid this year with construction expected to begin in early 2016.

One of the largest individual transportation projects in southwest Oregon, the Oregon 62 Expressway project is a multimodal solution that will increase capacity and improve safety along the Crater Lake Highway corridor, a critical business connection for freight, tourism and commuters.

Oregon 62 exceeds capacity standards. Future growth is expected to significantly increase traffic volumes, already some of the highest in southern Oregon and higher
than those on Interstate 5 north of Medford.

The multimodal project will add sidewalks and transit-related enhancements on the existing Oregon 62 corridor. The project will also build a four-lane access-controlled expressway that provides faster travel and improved safety within and through the region.

The project team finalized last-minute details for the Coker Butte crossing redesign and is still resolving a permit issue involving the Federal Aviation Administration and the Rogue Valley International-Medford Airport.

“The right of way process is always the critical path to the project package,” said Anderson. “We anticipate getting this project advertised for construction bidders and underway.”

That signal prioritization will allow bus drivers, when they are running behind due to congestion, to change upcoming traffic signals to the green phase, thus putting them back on schedule and reducing time the bus sits in traffic.

According to Brown, the biggest advantage of the upcoming expressway for transit riders will be a Bus Rapid Transit route from a Park-and-Ride in the White City area to an unspecified location in or near downtown Medford.

“Being able to bring in pedestrians, provide better access through sidewalks, create the possibilities of Park-and-Rides for commuters, and add signal priority will help us get back on schedule,” said Brown.

Oregon 62 Expressway
The 4.5-mile expressway will start with three lanes of eastbound traffic at Poplar and Bullock Roads near Fred Meyer. Through traffic will turn left on a small directional interchange located across from Whittle Road. Traffic will then travel along a four-lane expressway on the east side of the Medford Airport, span over Vilas Road, and connect to the existing Crater Lake Highway near Corey Road. Traffic destined for commercial centers such as Costco, Lowe’s and Safeway will continue as is done today.

For westbound traffic, three lanes of traffic will extend through the Poplar-Bullock intersection to the north jug-handle to Biddle Road.

“Project staging is crucial to keep traffic moving and business access open,” said ODOT Project Manager Tim Fletcher. “We expect much of the first phase work will be completed away from traffic.”

When it is on the heavily-traveled corridor between Poplar and Delta Waters Road, it will either be at night or behind solid barrier or both to limit impacts to traffic. 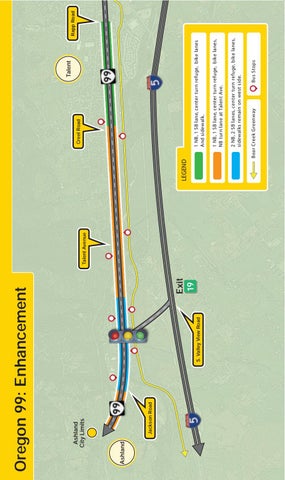