Major repairs to the Siskiyou Rail Line are on schedule so that the line is expected to reopen by mid-November.

Freight service on the historic line, which first opened in December  1887 and runs 95 miles from Ashland to Weed, stopped in 2008.

The Siskiyou Summit Railroad Revitalization project is repairing and revitalizing a 65-mile section of the 296-mile stretch of the short line railroad, including rail, tunnels, ties and bridges as well as upgrading its freight capacity to handle the 286,000-pound industry standard for rail cars.

Currently, timber companies and other southern Oregon manufacturers must ship by freight rail north to Eugene to meet the Union Pacific line into the Southwest.

Don Seil is the project development general manager for the Genessee Wyoming Railroad Pacific Region, the parent company of CORP, which is based in Salem.

“Opening the line will provide major opportunities for southern Oregon and northern California shippers,” said Seil. “The basic plan is five-day-a-week service between Weed and Medford. So, if you live in Ashland, you’ll see two trains a day, one in each direction.”

Seil said each train will be loaded to 12 to 14 cars in length.

Repair work started last spring. So far, crews replaced 42,000 new ties, some dating back to the late 1940s as well as 50,000 linear feet of new rail. Each section of rail comes in 1,600 foot lengths, transported by work train.

More than 20 trestles were rehabilitated with new timbers and walkways. Tunnel 14, located south of Ashland, was in such bad shape that some of its 175 timber supports were collapsing. Tunnel repairs included spraying the walls with shotcrete and adding new rail, ties and ballast, the rock foundation for the rails.

“The tunnel was really in bad shape,” said CORP Construction Inspector Rich Pedula, on the project. “There were a lot of drainage and mud problems. It was well worth the repair.”

“Anytime a line has been shut down for several years, there are items that need to be accomplished, such as removing weeds and trees that have grown up near the tracks, crossings that aren’t working properly and an accumulation of debris that’s fallen near the tracks,” said Seil.

ConnectOregon IV
A second, smaller project funded through the ConnectOregon IV program is improving the clearances of tunnels and other rail infrastructure between Douglas and Jackson counties.

The $5.7 million project, which received a $4.5 million ConnectOregon IV grant, will open access to the Rogue Valley with modern, high-capacity rail car equipment.

“The  project will allow taller, high-capacity boxcars to be used on the Siskiyou Line,” said Bob Ragon, spokesman for Coos-Siskiyou Shippers Coalition, the organization at the forefront of bringing together industry, CORP, and local, state, and federal government representatives to pursue the TIGER grant program.

Each project is multimodal, multi-jurisdictional or otherwise challenging to fund through existing programs. Applications were evaluated through a competitive process by technical and professional experts at the DOT, and project benefits were analyzed to ensure that limited funds were spent most effectively. The TIGER programs use rigorous, multimodal selection criteria and the results of economic analysis to select projects and track the effectiveness of TIGER investments through focused project-specific performance measurement plans. 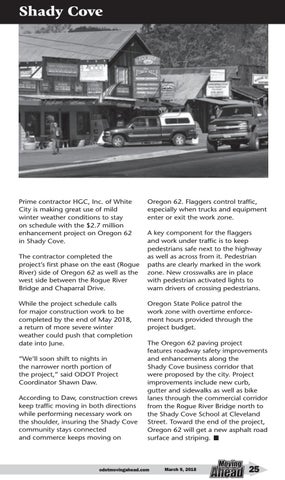