Economic benefits of rail are many

In spring 2009, Siskiyou Summit Line shippers and the Central Oregon & Pacific Railroad were negotiating new rates for hauling freight from Weed to Ashland. A combination of difficult circumstances, including reduced car loads and increased maintenance and reconstruction costs, led to an impasse and CORP was forced to discontinue service. Much of the needed work included repair of significant safety hazards that had developed over time.

The shippers expended considerable effort trying to find an alternative operator but the reconstruction costs were insurmountable. Shortly after determining that we needed outside financial support, the shippers and CORP met and developed an action plan to restore service.

A short-term plan was developed to improve service to the Rogue Valley by raising the ceilings inside five tunnels in the Glendale area, allowing passage of new high-capacity cars and lowering shipping costs by increasing freight loadings per car. It was agreed CORP and shippers would apply for a ConnectOregon IV grant to fund the $5.7 million project. Submitted in 2012, the application was approved by the Oregon Transportation Commission and the tunnel project was completed in 2014. Shipping costs for customers have substantially improved since.

The long-term plan was to seek a federal TIGER (Transportation Investment Generating Economic Recovery) grant to reconstruct the Siskiyou Summit Line, since it involved assets in Oregon and California. The two main shippers on the line, Roseburg Forest Products and Timber Products Company, funded the grant writing, which was submitted by the Oregon Department of Transportation in early 2012. Chosen from more than 1,000 applications, the Siskiyou Line received an $8 million grant to repair and reopen the line. The shippers and CORP agreed to a 20 percent match of the total repair cost.

We celebrated the line reopening last month in Medford.

Benefits to the economies of southern Oregon and northern California are many. A large number of trucks will be taken off Interstate 5, reducing road maintenance costs and improving safety over mountain passes that have challenging winter maintenance issues. Fuel usage to transport products will be substantially reduced because of rail’s efficiency over trucks. Products manufactured in the southern part of Oregon will now be hauled directly south to California, reducing the number of cars that had been hauled to Eugene, over the Willamette Pass and then back south to California.

These improvements will significantly reduce production costs for our local industries, helping to maintain competitive advantages and insuring the long-term viability of our industrial producers as well as family wage job opportunities in rural Oregon. This truly is a time for celebration, well worth the determination and energy expended to make it happen.

Bob Ragon has a long list of accomplishments in the timber industry since moving to Roseburg in 1976. He is the Executive Director of Douglas Timber Operators, a community-supported forest products organization. Ragon also serves as spokesman for the Coos-Siskiyou Shippers Coalition. The Coalition’s goal is to maintain safe and efficient rail service for members of the Douglas Timber Operators and their associates who ship raw materials and finished products on the Coos and Siskiyou short rail lines. 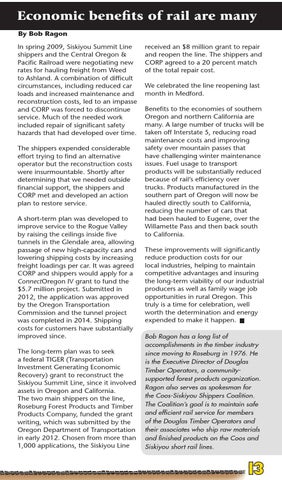