With most state highway projects already wrapped up for the winter, the Fern Valley Interchange project is looking ahead to its next milestone, a partial opening of the Diverging Diamond interchange on Interstate 5.

The project addresses traffic congestion, during morning and evening commutes. Existing and proposed development along the east side of I-5 in Phoenix had reduced the capacity and created safety issues.

The Fern Valley Interchange project’s size and complexity, encompassing I-5, Oregon 99 and Fern Valley Road, requires more than two full construction seasons to complete. In addition to construction of the Diverging Diamond interchange, the project realigns North Phoenix Road between Peterbilt Motors and The Home Depot.

Concrete pours
The project’s prime contractor Hamilton Construction has focused on concrete work on the east side of the new I-5 bridge.

The Luman Road intersection is scheduled for another weekend closure in December, so it can be finished in concrete. The connection between Oregon 99 and I-5 was closed for a weekend last September, allowing workers to raise the intersection’s elevation and pave it with asphalt.

As in September, access into the Shoppes at Exit 24 is maintained from Oregon 99 during weekend closures.

“Concrete pours have been the critical path for Hamilton to reach the next project milestone, which is opening the new I-5 interchange,” said ODOT Assistant Project Manager Eric Finney.

“To get the intersection open by 5 a.m. Monday, the pour needs to be finished by early Sunday morning,” said Finney.

According to Finney, the roadway surface in the entire interchange area is being constructed using concrete, which has a lifespan decades longer than asphalt, especially in areas where there will be a great deal of stop-and-go traffic with heavy trucks.

Partial opening
“The key to a partial opening of the interchange is connecting the temporary northbound off-ramp, south of Pear Tree Lane and South Phoenix Road,” said Finney. “Once that’s complete, the new interstate bridge can open.”

Hamilton Construction plans on a gradual opening of the interchange, by bringing traffic to individual interchange ramps over the course of several nights.

“Traffic coming from or to Medford from Phoenix will be on the permanent ramps instead of temporary ones, but it will open in phases,” said Finney.

Temporary ramps will still be in place on the south side of the new interchange, including the existing temporary southbound on-ramp and the new northbound off-ramp, using either Pear Tree Lane or South  Phoenix Road.

Demolition of the old interstate bridge must occur before the contractor can build the permanent, new northbound off-ramp.

Westside phases
Paving and curb work is underway west of the Bear Creek Bridge on the south side of Fern Valley Road, near the recently developed commercial triangle. Traffic is running on the recently completed north section.

Once Fern Valley Road is complete, Hamilton Construction is expected to shift over to the east side of Oregon 99 and then transition to Bolz Road.

“The Diverging Diamond design provides more traffic capacity and safety for motorists,” said ODOT Public Information Officer Gary Leaming. “To enter I-5 or cross over it, drivers will move to the opposite side of the bridge, which reduces the number of signal phases a driver needs to clear.”

The Missouri Department of Transportation was the first public agency in the United States to construct an interchange with this diamond design. Since then, several more DOTs across the nation have adopted and built them.

Bridge aesthetics
Aesthetic features inspired by the hills and grasses — the natural colors surrounding Phoenix — are being incorporated in the new Fern Valley Interchange project.

How Do You Drive a Diverging Diamond Interchange?

The Diverging Diamond Interchange is a different driving experience. The DDI moves traffic more safely and efficiently. Do your homework now. Learn how to drive the DDI.

Watch the project video, which shows you how to drive the new Fern Valley interchange at I-5 Exit 24. 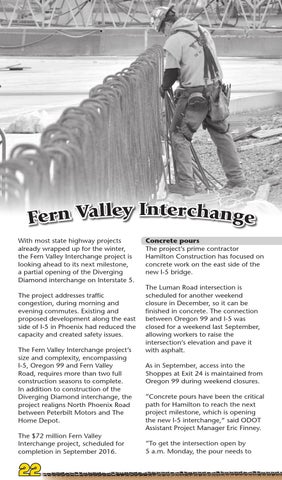