Maintenance Manager Everett Carroll and his crew based in Ashland are responsible for ten miles of the Siskiyou Pass on Interstate 5, ODOT’s highest priority in southern Oregon due to its importance as a regional freight route and high traffic volumes.

“Bring it on,” said Carroll. “Our crew is prepared, equipped and looking forward to the winter challenge.

“Sadly, it is the public who are often unprepared and ill-equipped for winter storms.”

Siskiyou Pass
Other mountain passes in Southern Oregon are maintained at lower levels of service than the Siskiyou Pass. While the Sexton, Smith and Stage Passes on I-5 in Josephine County have equal priority to the Siskiyous, those mountain passes are at significantly lower elevations and do not see the same frequency of winter storms.

“We go to a higher standard of traction devices on the Siskiyou Pass because of the grades, the traffic and drivers’ experience,” said ODOT District Manager Jerry Marmon. “When we light our signs, every vehicle on the Siskiyous has to chain up except vehicles equipped with four-wheel drive.”

“The HAR is a great communication tool,” said Marmon. “Drivers get real time updates on the summit conditions, so they can adjust their plans whether to either stop and rest or proceed over the pass.”

According to Marmon, the HAR signal broadcasts north to Central Point.

Unprepared drivers
Motorists are often caught ill-equipped to travel over the I-5 mountain pass.

Winter storm-related delays and short-term closures are a common occurrence on the Siskiyou Pass.

“We often see people unprepared for a long wait,” said Carroll. “Traveling over the Siskiyous in shorts and sneakers shows a lack of common sense, as does sitting in the wet snow, trying to chain up at night without either a flashlight nor gloves. Yet, we see it happen every winter.”

Preparation and patience
You need to prepare your vehicles to gear up for winter weather driving.

You need patience, too.

“You can’t expect to travel over Siskiyou Pass or Sexton Pass without occasional delays during winter storms,” said Marmon. “We’re at the mercy of the weather and the public’s ability to drive in adverse conditions.”

For example, chain requirements on the Siskiyou Pass come with delays.

“Big snowstorms test the public’s patience,” said Marmon. “Drivers who are prepared stay warm and safe until they get over Siskiyou Pass. Don’t take chances. Prepare for the worst.” 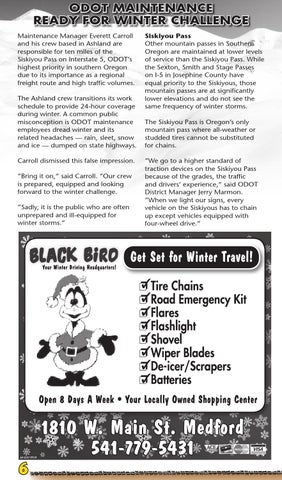