The first phase of construction for the Oregon 62 Corridor project is expected to bid in February 2016 with construction scheduled later that spring.

This latest project delay is a result of the Rogue Valley International-Medford Airport’s updated Runway Protection Zone at the south end of the runway.

A corner of Rogue Valley lnternational-Medford Airport’s updated Runway Protection Zone at the south end of the runway is in conflict with roadway design established earlier in the Oregon 62 Corridor project’s design phase. That roadway design had received previous federal approval.

“Unfortunately, this delay means the project won’t begin this year as planned,” said ODOT Area Manager Art Anderson. “However, if we can get the project contractor ready to start by late spring, we should be able to meet the critical time period for work in Upton Creek and Lone Pine Creek.”

Expressway
The 4.5-mile expressway project’s will start with three lanes of eastbound traffic at Poplar and Bullock Roads near Fred Meyer.

Through traffic will turn left on a small directional interchange located across from Whittle Road. Traffic will then travel along a four-lane expressway on the east side of the Rogue Valley lnternational-Medford Airport, span over Vilas Road, and connect to the existing Crater Lake Highway near Corey Road. Traffic destined for commercial centers will continue as is done today.

“Project staging is crucial to keep traffic moving and business access open,” said ODOT Project Manager Tim Fletcher. “We expect much of the first phase work will be completed away from traffic.”

The second phase of the Oregon 62 Corridor project, scheduled to bid in late 2016, will continue the roadway north; a corridor bridge will span Vilas Road and follow the Old Medco Haul Road before meeting Oregon 62 near Corey Road north of White City. 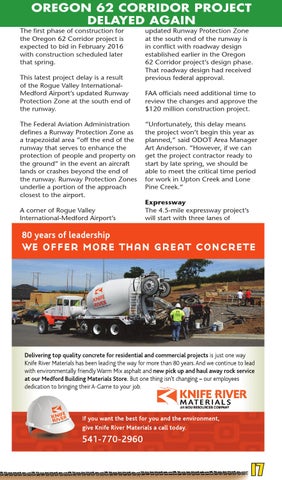