The seven-mile section targeted in this project will complete a 21-mile paving and safety upgrade to U.S. 199 from Grants Pass and Cave Junction that started in summer 2015.

This section of the Redwood Highway has a higher-than-normal crash rate for rural interstate highways in Oregon. Many of the crashes involve drivers who run off the road, especially at night.

“This summer’s project picks right up where the other one left off,” said ODOT Project Manager Ted Paselk.

“We’ll replace some substandard guardrail, widen the highway shoulders in select locations and improve the overall nighttime visibility on the highway.”

The 2015 summer project paved fifteen miles of the Redwood Highway between Slate Creek and Cave Junction. That project included a lane conversion project in Cave Junction that reduced the number of traffic lanes from four to three and included a new two-way left-turn lane. The city-supported design added bicycle lanes on both sides of the highway and improved pedestrian access along a half-mile section within the city limits.

This summer, ODOT returns to Cave Junction, where it will improve ADA ramps at three Cave Junction intersections. However, the majority of the work is focused on replacing the existing open-graded asphalt with a dense grade mix of asphalt that creates a smoother ride.

The project will also add center line rumble strips, replace substandard guardrail and add a right-turn lane for westbound traffic at the intersection of Redwood Highway and Round Prairie Road.

Redwood Highway experiences one of the larger seasonal increases in traffic compared to other highways in Oregon, averaging upwards of 9,100 vehicles per day throughout the year and rising to 11,000 vehicles per day during the summer months.

“We simply cannot do this type of construction work during the day,” said Paselk. “If we tried, there would be a lot of unhappy people.” 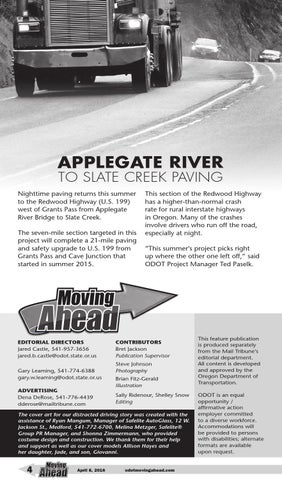