“Our analysis shows that, if we take no steps in the near future to limit the number of distracting activities in a vehicle, those who represent the next generation of drivers will only continue to be at greater risk of a crash,” said Tom Dingus, director of the Virginia Tech Transportation Institute.

Even as awareness increases, drivers are participating in risky behaviors behind the wheel, especially younger drivers predisposed to distracting activities in a world filled with electronic gadgets.

What Can You Do?
According to Tim George, parents must take an active role to protect their teenagers, their adult children and their grandchildren.

“It is all about managing risk,” said George, who retired after 38 years with the Medford Police Department last November. “I insisted my children put their phone out of sight — in the back seat or the trunk. You have to insist that they don’t use or look at their cell phone while driving.

“I still reinforce it with them today as adults. Reinforcing good safety habits makes for better drivers downstream. That benefits all of us.”

Bad Drivers
Car crashes rank among the leading causes of death in the United States. Oregon traffic fatalities rose for the second straight year in 2015 with an increase in the number of single-occupant vehicles driving off the road for reasons unknown.

AAA noted “some aspects of the current traffic safety culture…might be characterized most appropriately as a culture of indifference” despite the fact that nearly 1 in 3 Americans have had a friend or relative seriously injured or killed in a crash.

Nearly 1 in 3 drivers admit to typing or sending a text message or email while driving in the past month.

Research from Virginia Tech Transportation Institute showed drivers more than double their crash risk when engaging in distractions that take their eyes off the road. 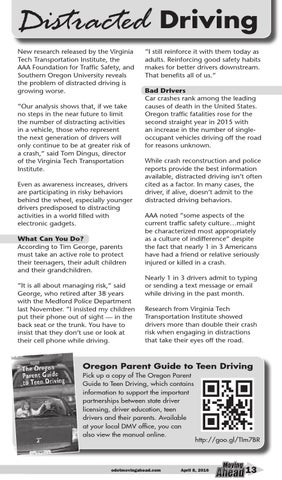