“Do As I Say, Not As I Do” Attitude Persists

Cell phone use while driving remains widespread, according to a nationwide survey released earlier this year by the AAA Foundation for Traffic Safety.

The Traffic Safety Culture Index, which included 2,442 licensed drivers, found an attitude of “do as I say, not as I do” still persists among motorists. Nearly nine out of ten drivers surveyed admitted to engaging in risky behaviors while behind the wheel within the past month.

Support for texting bans for drivers is strong (87.7 percent) and support for bans on hand-held mobile devices is lower but solid (70.3 percent), while support for a total ban (hand-held and hands-free) is even lower (42.4 percent).

Since 2006, the AAA Foundation for Traffic Safety has been sponsoring research to better understand traffic safety culture. 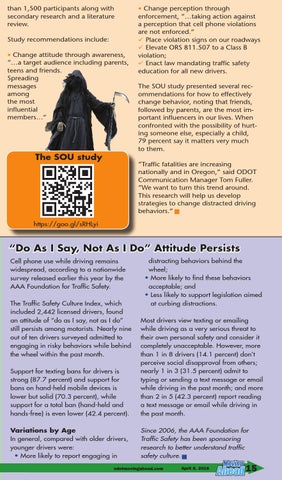