Oregon 62 Expressway Construction Begins in May

The first phase of the $120 million Oregon 62 Expressway project breaks ground in May. Prime contractor Knife River Materials is on board and ready to begin construction on the two-year multimodal solution that will increase capacity and improve safety along the corridor, which is a critical business connection for freight, tourism and commuters.

“Project staging is crucial to keep traffic moving and business access open,” said ODOT Project Manager Tim Fletcher. Much of the first phase will be completed at night or behind solid barrier to reduce the construction impacts to traffic and businesses.”

According to Fletcher, keeping traffic moving will be a priority. The contractor is required to keep two lanes of Oregon 62 open in each direction from 6 a.m. to 7 p.m., Monday through Thursday and from 6 a.m. to 10 p.m. Friday through Sunday.

“Business accesses will remain open and will be signed during construction,” said Fletcher.

Other work planned for this summer includes construction of a multi-use path on ODOT property south of the existing Oregon 62 sidewalk. The contractor will also work under Crater Lake Highway near Lava Lanes in Lone Pine Creek, which restricts work to a three-month, in-water work period until September 15.

Business Access Changes
The construction work requires restricting left turns onto Oregon 62 from businesses, including those  located along Sky Park Drive and Whittle Road. Once the project is complete, turn movements will be limited to right-in and right-out, except for the Whittle Road intersection.

“We know the highway needs to be upgraded for safety, but we’re obviously concerned that customers will continue to find us and shop with us,” said Bob Seus, owner of Hubbard’s Hardware.

Seus said a big concern for Hubbard’s is shoppers won’t be able to turn left onto Whittle Road during much of the construction. He’s looking at options to market to and direct customers coming from the Eagle Point area via either Owen Drive or Delta Waters Road.

Signal prioritization will allow bus drivers, when running behind due to congestion, to change upcoming traffic signals to the green phase, thus putting them back on schedule and reducing time the bus sits in traffic.

62 Exceeds Capacity
Oregon 62 exceeds its capacity standards. Future growth along the corridor is expected to significantly increase traffic. The multimodal solution took more than a decade to complete.

“The safety concern is higher crash rates at corridor intersections, especially from I-5 to Delta Waters Road,” said ODOT Public Information Officer Gary Leaming. “The busiest intersection in the Rogue Valley is Oregon 62 and Delta Waters Road. It has traffic numbers higher than those along I-5 north of Medford.”

4.5-mile Expressway
Through traffic will travel along a 4.5-mile, four-lane expressway on the east side of the Medford Airport. The expressway will cross over Vilas Road via an overpass, and connect to the existing Crater Lake Highway near Corey Road.

The project adds sidewalks and transit-related enhancements on the existing Oregon 62 corridor.

According to Brown, the biggest advantage of the upcoming expressway for transit riders could be a Bus Rapid Transit route from a Park-and-Ride in the White City area to an unspecified location in or near downtown Medford.

“Being able to bring in pedestrians, better access through sidewalks, the possibilities of Park-and-Rides for commuters, and the addition of signal priority will help us get back on schedule,” said Brown.

Second Phase
Scheduled to bid later this year, the project’s second phase will continue the roadway north. It will span Vilas Road via an overpass as it follows the Old Medco Haul Road before connecting with the existing Oregon 62 corridor near Corey Road, south of White City.

“Once drivers get on the expressway there’s no getting off,” said Fletcher. Provisions have been made for emergency vehicles to be able to access it via Justice Road. 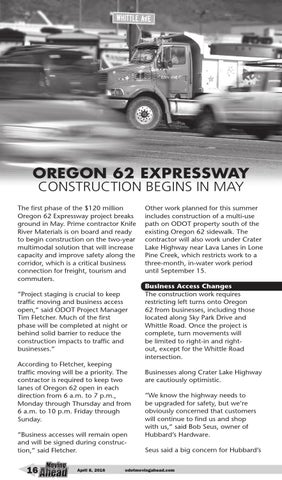