Scour protection on tap for two I-5 bridges

Two Interstate 5 bridges, which span Bear Creek north of Medford, are on schedule to receive needed repair work during the summer construction season. I-5 travelers, however, probably won’t notice the construction work since the repair is focused beneath the bridges’ decks in Bear Creek.

This project is the first major repair work planned for the bridges since Interstate 5 opened in the Rogue Valley in the early 1960s. Added erosion protection in the form of riprap will protect the bridge supports in Bear Creek.

“The current riprap at the bridge supports is undersized to the point where erosion or scour from a major flood could undermine the supports and render the bridges useless,” said ODOT Project Manager Ted Paselk. “This is a relatively simple project, really. Rock of various sizes is brought in by truck, staged at the site, and placed strategically up to and around the bridge’s vertical supports.”

Most materials will be delivered via Midway Avenue in Medford to ODOT-owned property located adjacent to the bridges. Residents along Midway Avenue from Table Rock Road will see a temporary increase in truck traffic during rock deliveries.

The $460,000 repair project is scheduled to run from June 15 to September 15. Construction will be staged to keep the Bear Creek Greenway open to users.

“Summer time use on the Bear Creek Greenway is high,” said Jackson County Greenway Manager Jenna Stanke. “We’re glad steps are being taken to keep the Greenway open during construction.”

The Greenway provides a separated route from cars, with only two at-grade road crossings. The trail parallels I-5, Highway 99, and Bear Creek, and provides Rogue Valley residents and visitors to the area a close-in spot for bird watching and wildlife viewing, as well as exercise and general recreation.

Parks along the route provide parking, restrooms, and drinking water.

For information about trail status and closures, call 541-774-7799, or visit the Bear Creek Greenway Facebook page.

Jackson County, along with the Cities of Ashland, Talent, Phoenix, Medford, and Central Point, collaborate to develop and manage the trail. 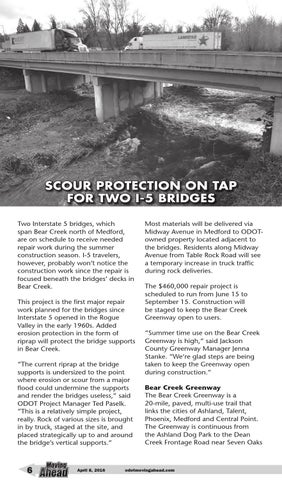