Co-sponsored by ODOT and SOU, the study was developed by four students — Angela Durant, Kelsie Lawson, Simon Schubnell and Kristina Wolf — from the professional master’s of business administration program at SOU’s Graduate School of Business. In March, they released Distracted Driving: An Epidemic, A Study of Distracted Driving Attitudes, Behaviors and Barriers Preventing Change.

The SOU team gathered research via an online questionnaire with more than 1,500 participants along with secondary research and a literature review.

Study recommendations include:
• Change attitude through awareness, “…a target audience including parents, teens and friends. Spreading messages among the most influential members…”

• Change perception through enforcement, “…taking action against a perception that cell phone violations are not enforced.”
• Place violation signs on our roadways
• Elevate ORS 811.507 to a Class B violation;
• Enact law mandating traffic safety education for all new drivers.

The SOU study presented several recommendations for how to effectively change behavior, noting that friends, followed by parents, are the most important influencers in our lives. When confronted with the possibility of hurting someone else, especially a child, 79 percent say it matters very much to them.

“Traffic fatalities are increasing nationally and in Oregon,” said ODOT Communication Manager Tom Fuller. “We want to turn this trend around. This research will help us develop strategies to change distracted driving behaviors.” 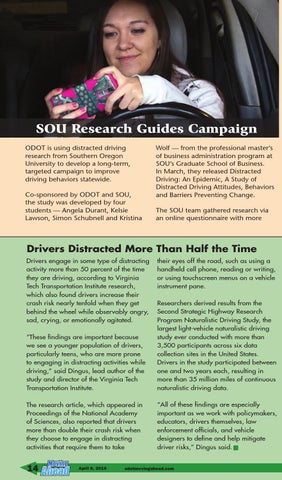