In early 2014, we were ready to begin the two and a half year process needed to rebuild Interstate 5 Exit 24.

Through the years of planning and communication with ODOT, we knew this project would be more complex than just replacing a bridge and a few freeway ramps.

It would stretch about a half mile west on Fern Valley Road with a new bridge over Bear Creek to connect with Highway 99. On the east side, there would be a new road to connect both sides of the city through the interchange.

After a slow start that first winter, the summer of 2014 kicked into high gear with steady construction ever since. We now see the light at the end of the tunnel with a projected finish date later this year in September.

While people are weary of construction, they eagerly anticipate the long-term benefits to Phoenix. I have thought about what this will mean for Phoenix a great deal. I have come to the conclusion that the Exit 24 project will be a tremendous benefit and a key to our future. Retail, light industrial and other developers will want to build near the high-capacity interchange. Approximately 400 acres near there will be brought into our urban growth boundary with part of it providing some relief for much-needed residential development. The project will help provide a jump start for our urban renewal efforts in our city center on the west side of I-5. Along with our move to single-lane traffic on Highway 99, the new traffic patterns from this project help meet our plans for a small business- and pedestrian-friendly city center.

While I can’t say the process has been without inconvenience, I can say that ODOT and the contractors have exceeded our expectations to communicate effectively and plan any temporary inconveniences well in advance.

Looking back, I am amazed at the mountains of dirt that have been moved; the two bridges that have been dismantled and replaced with much larger bridges; and, the roads that have been built or expanded. The current state of road and bridge construction is truly a marvel. We are now at a point where it is almost finished and excited to see what the future will bring. On behalf of the people of Phoenix, we say thank you to everyone who helped make this long-term dream a reality.

Jeff Bellah is in his fourth year as the Mayor of Phoenix, after serving on the City Council. An Army Veteran, Mr. Bellah served a total of 35 years in civilian service with the federal government. Serving in a wide range of positions, including Regional Quality Manager and National Program Director, Bellah retired in 2011. He is a proud graduate of the University of Oregon. A long-time resident of Phoenix, he has been married for 37 years and has two grown daughters and two grandchildren. 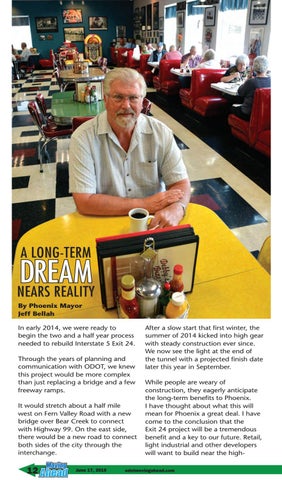