Thanks to Oregon’s 2009 Jobs and Transportation Act (JTA), commercial truckers climbing some of the steepest mountain grades found on the entire Interstate 5 corridor are traveling safer and experiencing less congestion than ever before.

Last year, prime contractor Knife River Corporation of Central Point completed the northbound climbing lane on Sexton Mountain, part of a $49 million project that included paving, striping work and safety improvements to curves along a 17-mile stretch of I-5 from Hugo north to Glendale. The JTA funded $10 million of the project.

“The truck climbing lanes are a huge benefit,” said Mike Card, president of Combined Transport based in Central Point. “Trucks are a lot slower going up mountain passes. When you have only two lanes and cars and other trucks trying to pass, you have congestion. Safety is critical.”

“We’re an industry based on just in time delivery and any delay is harmful,” said Card. “The ability to pass other trucks in a safe environment helps us stay on schedule.”

While most freeway climbs are built on grades of 5 percent or less, the northbound I-5 lanes on Sexton Mountain pose a 6.13-percent grade, which caused trucks to frequently slow to less than 30 mph during the climb. The speed differential to other I-5 traffic can be hazardous.

The Federal Highway Administration identified some of the worst truck bottlenecks in the nation are caused by steep grades on I-5 in southern Oregon.

Sexton Mountain
The 12-foot truck climbing lane extends 2.8 miles from the northbound on-ramp at the Hugo Exit 66 to just beyond the crest of the Sexton Mountain pass. The climbing lane was partially built on the former I-5 shoulder, which was also replaced with a new, 10-foot shoulder.

The Sexton truck climbing lane will reduce the frequency of I-5 closures related to commercial trucks, especially during winter, and reduce the need for ongoing shoulder maintenance.

Construction of the Sexton truck climbing lane required closing the emergency shoulder and placing concrete barriers on I-5 to separate traffic from construction work. An estimated 250,000 cubic yards of soil and rock — enough material to fill nearly 14,000 18-yard dump trucks —were removed to clear room for the truck climbing lane.

The Oregon Gateway Report from 2007, which was developed by the Southwest Economic Transportation Team, also described the need for continued improvements to I-5. The report noted that improved highway capacity between the Rogue Valley and the Port of Coos Bay and the coastal communities in Coos and Curry counties will result in substantial economic expansion. The addition of climbing lanes in the mountain pass areas of I-5 would contribute to this economic expansion. 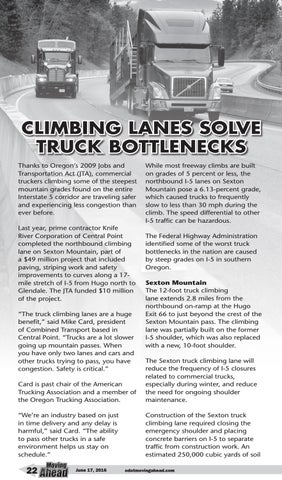