The $72 million Fern Valley Interchange project is headed into the home stretch, with roughly four months left, following more than two years of highway construction in Phoenix at the Interstate 5 Exit 24.

Work currently underway includes the opening of the permanent northbound off-ramp, widening and base paving on Oregon 99 and Bolz Road, and final striping. Construction work still to come includes final paving on the west side of the interchange, new traffic signals and the opening of the Bear Creek Bridge. The project is scheduled for completion in September.

“The project is really starting to come together now as we enter the summer,” said ODOT Project Manager Tim Fletcher.

Fletcher said the last month was a busy one with I-5 paved in the project area and the new southbound on-ramp opened, following a five-day closure to connect the temporary ramp with the permanent one.

“After the ramp opening, we put down permanent stripes and repainted the temporary stripes we first added last February during the interchange’s partial opening,” said Fletcher. “The temporary paint fades fast.”

The application of temporary paint allowed for additional adjustments as traffic adapted to the Diverging Diamond design. Fletcher cited one example where yield bars were moved to improve sight distance for southbound traffic taking the off-ramp to travel east of Phoenix.

The next, and final, ramp to complete is the permanent northbound off-ramp, which is scheduled for a July opening.

“Work on the northbound off-ramp is harder than it was on the southbound on-ramp,” said ODOT Project Information Specialist Gary Leaming. “We need to move more material because of the old bridge approach. And a water detention pond must be built.”
The Bear Creek Bridge is also slated to open in July. Once traffic shifts over to the new structure, work will focus on adding sidewalks to the north side.

“The bridge will open but still be an active work zone,” said Leaming.

The Bear Creek Greenway has been in a detour since the beginning of the project. Bridge replacement necessitated a rapid flashing beacon to warn motorists of Greenway users crossing the road. According to Fletcher, there’s still work left to connect the permanent Greenway ramps to the new bridge and build a connection beneath it.

“ODOT has made it a priority to keep the Bear Creek Greenway connected during the construction project,” said Jackson County Greenway Coordinator Jenna Stanke. “The Greenway has about 400 daily users.”

New Street Names
Once the project is complete, different names will appear on some project area roadways. ODOT met with Phoenix officials and emergency service representatives several years ago to coordinate the changes.

• North Phoenix Road will carry through the overpass to the west side of I-5 and terminate at the Oregon 99 signal across from Ray’s Market.
• Fern Valley Road will appear only on the east side of I-5, terminating at a cul-de-sac joined by Pear Tree Lane.
• Grove Road will replace South Phoenix Road in the southeast area of the project, extending across Fern Valley Road through the traffic signal near Home Depot before reaching a dead end behind the Lazy Boy Furniture store.

“The Diverging Diamond design was developed specifically with Phoenix in mind,” said Leaming. “The objective was to reduce the project footprint. That reduces the project’s impact on surrounding businesses and reduces right of way costs. The design also provides better traffic capacity and safety for motorists.

“To enter I-5 or cross over it, drivers move to the opposite side of the bridge, which reduces the number of signal phases a driver needs to clear.”

‘Show Me State’ Inspiration
The Missouri Department of Transportation was the first in the United States to construct an interchange with this diamond design. Several DOTs across the nation have since adopted the design.

The ODOT project team traveled to Missouri in 2010 to meet with Project Manager Don Saiko and see the new design first hand. Located on Interstate 44 at the intersection with Missouri Highway 13 in Springfield, the new design moves traffic efficiently and safely through a previously-congested intersection in a major commercial area.

The new design is important to freight haulers. Time spent sitting in a bottleneck is money lost.

Problem, Process, Solution
The Fern Valley Interchange connects I-5 and Phoenix at Exit 24. The interchange experienced traffic congestion through the day, but was much worse during the morning and evening commutes. Existing and proposed development along the east side of I-5, as well as development growth within the Rogue Valley, reduced the interchange’s capacity and caused safety concerns.

The project team filtered through several designs with the help of Medford landscape architect John Galbraith, before selecting aesthetics for the Fern Valley Road bridges that span I-5 and Bear Creek at Exit 24.

The Oregon State Police patrols the work zone. Traffic fines double in work zones, even when there are no workers present. TripCheck cameras were installed to help keep an eye on traffic in the work zone.

ODOT maintains a temporary construction office within The Shoppes at Exit 24 to serve as a base of operations for the project inspectors. The public is welcome to stop by the office for more information.

Watch the project video, which shows you how to drive the new Fern Valley interchange at I-5 Exit 24. https://m.youtube.com/watch?v=b01H54zLV0s 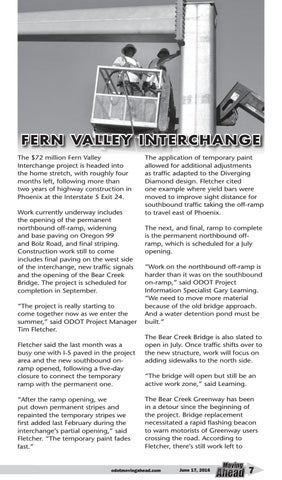