Nighttime travel between Ashland and Medford on Interstate 5 will encounter a moving work zone and short delays as nighttime paving returns to Interstate 5.

ODOT awarded Rocky Mountain Construction of Klamath Falls the nearly $6 million project, which is expected to begin later this month. The construction project will move along an eight-mile section of I-5 (MP 19 to MP 27) from 7 p.m. to 7 a.m., avoiding the higher traffic volumes that peak during the summer.

“There’s a lot of traffic on I-5, no matter what season you choose,” said ODOT Project Manager Tim Fletcher. “That’s why we only allow construction work that closes or slows down traffic to be performed at night.”

The asphalt along this section of I-5 has gradually become rough and rutted as it reached the end of its design life. According to Fletcher, ODOT directed a rehabilitation project several years ago as part of the agency’s preventative maintenance program to maximize the service life of the highway. The paving work in the Fern Valley Interchange project area has already been completed.
“Commuters who travel between Ashland and Medford will welcome the smoother ride,” said Fletcher.

Grind/inlay, also known as mill/inlay, involves grinding into the upper layer of the existing asphalt to remove any cracks, ruts and imperfections. A layer of inlay paving is placed atop the milled surface to fill holes and level it off. The last step is an asphalt overlay that finishes the process.

“This grind inlay project will replace the existing open-graded asphalt mix with a denser mix, which is designed to wear better and give a better ride,” said Fletcher.

Drivers will encounter intermittent ramp closures during the nighttime construction work. The project specifications will only allow each ramp to be closed for one night at a time.

“My advice this summer is to leave a little extra time, perhaps take an alternate route,” said Fletcher. “We’ll work with the contractor to keep the work zone safe, yet minimize traffic delays.”

Cable barrier
In addition to eight miles of paving work, the project will construct safety cable barrier between northbound and southbound I-5 from Exit 11 north to Medford.

Marmon said the section of cable barrier struck the most times in the Rogue Valley is located on I-5 north of Gold Hill, where southbound travelers have missed the curve near milepost 44 and struck the barrier multiple times, including a fatal motorcycle crash that occurred last month during the Memorial Day weekend. 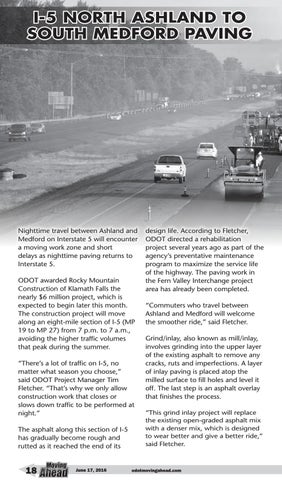