ODOT began the I-5 Medford Viaduct Planning and Environmental Study, a multi-part analysis, last year on the iconic, yet controversial Interstate 5 structure built in the early 1960s.

The study is examining the safety, operational and structural needs of the 3,222-foot concrete structure as well as the entire I-5 corridor from the Exit 27 south Medford interchange to the Exit 30 north Medford interchange. However, with neither dedicated funding nor a construction design on the shelf, the viaduct will likely remain unchanged for the foreseeable future.

“Surprisingly, tunneling I-5 was a popular idea, but very expensive.”

Data collected on the Medford viaduct shows consistent travel times and better-than-average capacity, which meets today’s mobility targets as well as those projected for 2040.

The project team is currently taking the first steps in preparing a seismic analysis model for the Medford viaduct. The work is scheduled through this summer. Data collected will help the team develop the next steps for the I-5 Medford Viaduct Planning and Environmental Study, which could extend through 2019.

“We hope to select a solution by 2019,” said Cornutt. “Construction funding would be pursued then as well.”

Oregon was thought to be seismically quiet when the Medford viaduct was originally constructed. Today, it is well known Oregon is vulnerable to a Cascadia Subduction Zone earthquake.

“Our initial screening showed we should be focusing our efforts toward seismic and operational improvements,” said Cornutt. “We’re currently not looking at capacity or changes to the local street network.”

The Oregon Transportation Commission selected the I-5 Medford Viaduct Planning and Environmental Study to receive $4 million in discretionary Enhance funding, a category of the ODOT capital improvement program focused on projects that enhance, expand or improve the transportation system.

“Any future project for the Medford viaduct would also need to balance environmental issues with Bear Creek, park land and expensive right of way costs,” said Cornutt. “When you start talking about replacement, project costs start at hundreds of millions of dollars. It is imperative we look at improvements at a lower range of costs that optimize public dollars.” 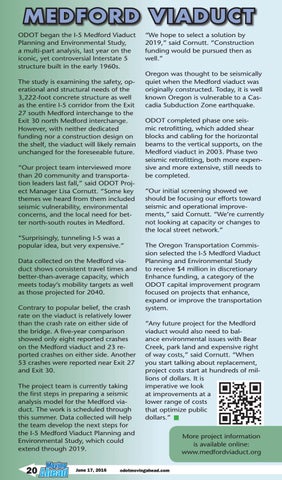