Commuters, shoppers and other travelers on Crater Lake Highway (Oregon 62) from Interstate 5 to Delta Waters Road trek through an active work zone for the $120 million Oregon 62 Expressway project.

The two-year multimodal solution, which underwent more than a decade of planning, will increase capacity and improve safety along the Crater Lake Highway corridor, a critical business connection for freight, tourism and commuters.

Mobility is Critical
Project plans require Knife River and its subcontractors to keep two lanes of Oregon 62 open in each direction from 6 a.m. to 7 p.m., Monday through Thursday and from 6 a.m. to 10 p.m. Friday through Sunday.

From now through mid-September, the project calls for three traffic switches during the replacement of the Lone Pine Creek box culvert located in front of Lava Lanes.

“The traffic switches are to ensure people can keep moving smoothly in the corridor while the box culvert is constructed,” said Fletcher.

A temporary access change to Delta Center behind Starbucks will also occur during the culvert replacement work. Traffic will still be allowed to enter but will need to exit at either Delta Waters Road or Excel Drive.

Other construction work that’s nearly complete is a multi-use path located on ODOT-owned property south of the existing sidewalk. The multi-use path will allow the contractor to begin tearing out the old south side curb line and begin constructing the new curb, gutter and sidewalk.

“The safety concern is higher crash rates at corridor intersections, especially from I-5 to Delta Waters Road,” said ODOT Project Information Specialist Gary Leaming. “The busiest intersection in the Rogue Valley is Oregon 62 and Delta Waters Road. It has traffic numbers higher than those along I-5 north of Medford.”

Left turns from Crater Lake Highway and from the intersection of Whittle Road and Skypark Drive will be removed. Westbound left turns were taken away earlier this month at Whittle Road in preparation for the culvert replacement. Further, the project schedule calls for removing left turns onto Oregon 62 in front of Hubbard’s Hardware in July and at Skypark Drive in September.

“We know the highway needs to be upgraded for safety, but we’re obviously concerned that customers will continue to find us and shop with us,” said Bob Seus, owner of Hubbard’s Hardware. Seus plans a media campaign to alert his customers of the coming traffic changes.

Seus said a big concern for Hubbard’s is shoppers won’t be able to turn left onto Whittle Road during much of the construction. He’s looking at options to direct customers coming from south from the Eagle Point area via either Owen Drive or Delta Waters Road.

4.5-mile Expressway
Through traffic will travel along a 4.5-mile, four-lane expressway on the east side of the Medford Airport. The expressway will cross over Vilas Road via an overpass, and connect to the existing Crater Lake Highway near Corey Road.

The project adds sidewalks and transit-related enhancements on the existing Oregon 62 corridor.

According to RVTD Manager Julie Brown, the biggest advantage of the upcoming expressway for transit riders could be a Bus Rapid Transit route from a Park-and-Ride in the White City area to an unspecified location in or near downtown Medford.

“Better access through sidewalks, the possibilities of Park-and-Rides for commuters, and the addition of signal priority will help us get  back on schedule,” said Brown.

Second Phase
The project’s second phase will continue the new roadway north, spanning Vilas Road via an overpass as it follows the Old Medco Haul Road before connecting with the existing Oregon 62 corridor near Corey Road. The second phase is scheduled to bid later this year. 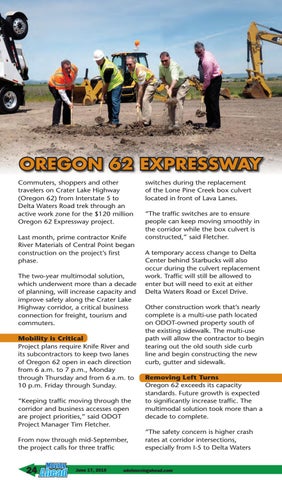