The seven-mile section of U.S. 199 targeted this year will complete a 21-mile paving and safety upgrade, from Grants Pass and Cave Junction, which began two summers ago.

Some of the earliest work scheduled for this summer’s project involves replacing two failing culverts under the highway.
“Drivers who have felt the dip, just southwest of the Applegate River Bridge, will be glad to know that 42-inch culvert will be replaced during the night, said Paselk. “The challenge will be that the culvert is nearly 20 feet deep.”

Paselk said an 18-inch culvert will also be replaced near Slate Creek.

The Redwood Highway experiences one of the larger seasonal increases in traffic compared to other Oregon highways, averaging as much as 9,100 vehicles per day throughout the year and rising to 11,000 vehicles per day during the summer.

The section of the Redwood Highway from Grants Pass to Cave Junction has a higher-than-normal crash rate for rural interstate highways in Oregon with many of the crashes involving drivers who run off the road, especially at night.

The 2015 summer project paved 15 miles of the Redwood Highway between Slate Creek and Cave Junction. That project included a lane conversion project in Cave Junction that reduced the number of traffic lanes from four to three and included a new two-way, left-turn lane. The city of Cave Junction supported the design, which added bicycle lanes on both sides of the highway and improved pedestrian access along a half-mile section inside the city limits.

This summer, ODOT returns to Cave Junction, where it will improve ADA ramps at three city intersections. However, the majority of the planned work is focused on replacing the existing open-graded asphalt with a dense grade mix of asphalt to create a smoother ride.

This project will also add center line rumble strips, replace substandard guardrail and add a right-turn lane for westbound traffic at the intersection of Redwood Highway and Round Prairie Road.

Work Zone Safety
• Slow down. Traffic fines double in work zones.
• Reduce distractions and pay attention to your driving.
• Double your following distance.
• Get in the correct lane well in advance.
• Remember, work zone traffic lanes often are narrow, without shoulders or emergency lanes.
• Be aware of temporary accesses to the roadway from the median.
• Uneven or sloped road surfaces can affect how your car handles.
• Report missing or poor signs. 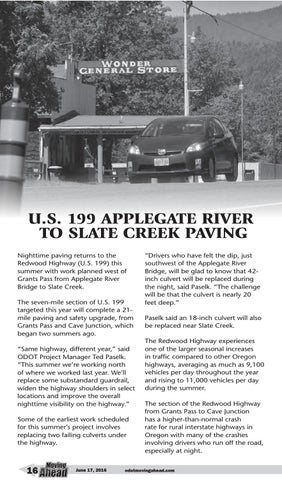