The $72 million Fern Valley Interchange project is nearly complete at Interstate 5 Exit 24 in Phoenix. This past month has been busy with final asphalt paving along Oregon 99 and the new North Phoenix Road west of the Bear Creek Bridge.

Work currently underway includes the opening of the permanent northbound off-ramp, widening and base paving on Oregon 99 and Bolz Road, and final striping. Construction work still to come includes final paving on the west side of the interchange, new traffic signals and the opening of the Bear Creek Bridge. The project is scheduled for completion this year.

“The project is in its final stages. Along with the punch list items, this is prime time for landscaping and the beginning of the plant establishment period,” said ODOT Project Manager Tim Fletcher.

Coming down to the wire, the main focus has been on the west side of the project, along Oregon 99 with final asphalt paving, the Bear Creek Bridge and Greenway connections. Work continues on the Fern Valley Road area near the Petro truck stop and Peterbuilt shops.

“ODOT has made it a priority to keep the Bear Creek Greenway connected during the construction project,” said Jackson County Greenway Coordinator Jenna Marmon. “The Greenway has about 400 daily users.”

In addition to the roadwork, the new sidewalk at the west end of Fern Valley Road will connect to the top of the interchange, so pedestrians won’t have to walk along Grove Road to the Home Depot traffic signal.

“We know our community is construction weary,” said Phoenix Mayor Jeff Bellah.”With the interchange project, and then our community projects, including the work we did on Main Street, we’ll be glad when the construction is finished.”

New Street Names
Once the project is complete, different names will appear on some project area roadways. ODOT met with Phoenix officials and emergency service representatives several years ago to coordinate the changes.

“The Diverging Diamond design was developed specifically with Phoenix in mind, and was presented to the project’s citizen teams,” said Leaming.

The design objective was to reduce the project footprint, which reduces the project’s impact on surrounding businesses and reduces right of way costs. The design also provides better traffic capacity and safety for motorists.

“To enter I-5 or cross over it, drivers move to the opposite side of the bridge, which reduces the number of signal phases a driver needs to clear,” said Leaming.

‘Show Me State’ Inspiration
In 2009, the Missouri Department of Transportation was the first in the United States to construct an interchange with this diamond design. Since then, 69 interchanges have opened in 23 states using the Diverging Diamond Design, with the I-5 Phoenix interchange being the latest one.

The ODOT project team traveled to Missouri in 2010 to meet with Project Manager Don Saiko and see the new design first hand. Located on Interstate 44 at the intersection with Missouri Highway 13 in Springfield, the new design moves traffic efficiently and safely through a previously-congested intersection in a major commercial area.

The new design is important to freight haulers. Time spent sitting in a bottleneck is money lost.

Problem, Process, Solution
The Fern Valley Interchange connects I-5 and Phoenix at Exit 24. The interchange experienced traffic congestion through the day, but was much worse during the morning and evening commutes. Existing and proposed development along the east side of I-5, as well as development growth within the Rogue Valley, reduced the interchange’s capacity and caused safety concerns.

The project’s design phase began in 2004. After years of public debate and comment, including the weighing of various design alternatives, The Fern Valley Through design alternative was eliminated in 2009 because it would have an adverse impact on nearby farm land. The Project Development Team later unanimously supported the North Phoenix Through build alternative as part of the federally-required environmental assessment.

The project team filtered through several designs with the help of Medford landscape architect John Galbraith, before selecting aesthetics for the Fern Valley Road bridges that spans I-5 and Bear Creek at Exit 24. 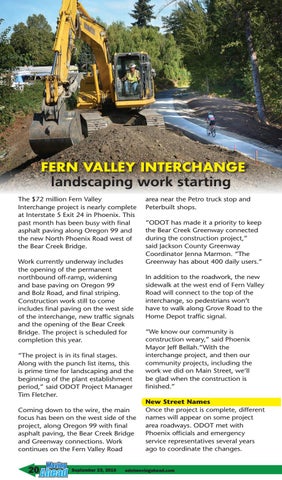