The Rogue Valley Area Commission on Transportation hosted the Oregon Legislature’s Joint Committee on Transportation Preservation and Modernization on August 31. The visit was part of the statewide summer tour the committee announced last May to discuss state and  local transportation needs with community leaders and the public across Oregon.

The 14-member committee held its first meeting at Oregon State Capitol in Salem before embarking on a statewide tour. The August 31 tour was hosted by the Rogue Valley Area Commission on Transportation at the Inn at the Commons in Medford.

The local tour included visits to the Rogue Valley Transit District, the Phoenix Main Street project on Oregon 99, the Fern Valley Interchange on Interstate 5, and the Oregon 62 Expressway project. After the tour, the committee held a two-hour public hearing at the Medford Branch of the Jackson County Library.

“These meetings will give our committee members an opportunity to listen to Oregonians from across the state identify local transportation needs, and to build support for a comprehensive plan that will keep our economy moving and build a brighter future for Oregon,” said committee co-chair Rep. Caddy McKeown (D-Coos Bay). 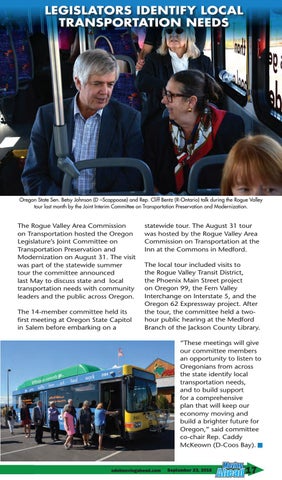