With the first summer of construction on the Oregon 62 Expressway project in the rear view mirror, ODOT Project Manager Tim Fletcher wants the smooth start to continue as construction progresses along Crater Lake Highway from Interstate 5 to Delta Waters Road.

“Drivers have done well so far negotiating our traffic switches during the Lone Pine Creek box culvert replacement,” said Fletcher. “Traffic switches will continue to a lesser degree this fall and winter as construction continues on the directional interchange.”

After prime contractor Knife River Materials of Central Point replaces the Lone Pine Creek box culvert located in front of Lava Lanes, the project focus will ramp up on the directional interchange and widening the south side of Crater Lake Highway.

Construction of a new multi-use path, located on ODOT-owned property south of the existing sidewalk, allows the contractor to tear out the old south side curb line so construction can begin on a third travel lane with new curbs, gutters and sidewalk.

Left Turns Eliminated
According to Fletcher, left turns from Crater Lake Highway and from the Skypark Drive intersection west to Poplar and Bullock Roads will be removed by the end of fall.

The $120 million multimodal solution, which underwent more than a decade of planning, will increase capacity and improve safety along the Crater Lake Highway corridor, a critical business connection for freight, tourism and commuters.

“The safety concern is higher crash rates at corridor intersections, especially from I-5 to Delta Waters Road,” said ODOT Project Information Specialist Gary Leaming. “The busiest intersection in the Rogue Valley is Oregon 62 and Delta Waters Road. It has traffic numbers higher than those along I-5 north of Medford.”

“We know the highway needs to be upgraded for safety, but we’re obviously concerned that customers will continue to find us and shop with us,” said Bob Seus, owner of Hubbard’s Hardware.

Reducing Traffic Impacts
Project plans require Knife River and its subcontractors to keep two lanes of Oregon 62 open in each direction from 6 a.m. to 7 p.m., Monday through Thursday and from 6 a.m. to 10 p.m. Friday through Sunday.

“Our construction schedule is designed to reduce traffic impacts because the daily volumes on Oregon 62 are so high,” said Fletcher.

During later construction phases, the Oregon 62 access near Starbucks will close for several months so roadwork can begin on the new westbound travel lanes, which will be incorporated into a new directional interchange.

“The closure of the access near Starbucks is integral to hauling material into the work site,” said Fletcher. “When this construction phase is complete, westbound traffic will travel up and over the directional interchange and the original access will reopen.”

Four-Lane Expressway
The project’s second phase, scheduled to bid later this year, will continue the new roadway north. The road will span Vilas Road with an overpass as it follows the Old Medco Haul Road before connecting with the existing Oregon 62 corridor near Corey Road.

Once the project is completed, through traffic will travel along a 4.5-mile, four-lane expressway on the east side of the Medford Airport. The expressway will cross over Vilas Road via an overpass, and connect to the existing Crater Lake Highway near Corey Road.

According to RVTD Manager Julie Brown, the biggest advantage of the upcoming expressway for transit riders could be a Bus Rapid Transit route from a park-and-ride in the White City area to an unspecified location in or near downtown Medford.

“Better access through sidewalks, the possibilities of Park-and-Rides for commuters, and the addition of signal priority will help us get back on schedule,” said Brown.

Fender Benders on Oregon 62
Several intersections along the Oregon 62 corridor between Delta Waters Road and Interstate 5 have higher than normal crash rates.

The good news is fender benders are the least serious and most common along the corridor. Traffic flow problems occur when motorists involved in minor crashes don’t move their vehicles out of the travel lanes.

“Under the best of circumstances, traffic is typically heavy along the Crater Lake Highway,” said Medford Police Sgt. Don Lane.

To address the problem, ODOT placed signs along the Oregon 62 corridor to remind drivers of their responsibilities.

Fender benders get the name because it is the part of a vehicle that absorbs most of the damage in lower-speed crashes. Fender benders occur when one driver suddenly slams on the brakes, which causes the driver following to collide.

Oregon law requires you to stop after a collision and pull out of any driving lanes, even if the traffic behind you is stopped. This is to avoid a secondary collision, as well as to not impede traffic flow.

“Minor crashes are defined as when the vehicles are drivable and the people are without injuries,” said ODOT Assistant District Manager Jeremiah Griffin. “In these situations, motorists are required to move their vehicles, either to the highway shoulder or to a nearby parking lot, and away from the travel lanes.”

If you are the front car in a collision, motion to the other driver to follow you to a close place where there’s room for both of you to pull over safely. If you’re on the shoulder, stay as far away from moving cars as possible while you assess damage and exchange insurance information.

According to Griffin, safety concerns rapidly increase as the stopped vehicles in a fender bender affect traffic along the corridor and cross streets all the way back to the I-5 interchange and off-ramps.

“The likelihood of a secondary crash increases with each passing minute,” said Griffin. 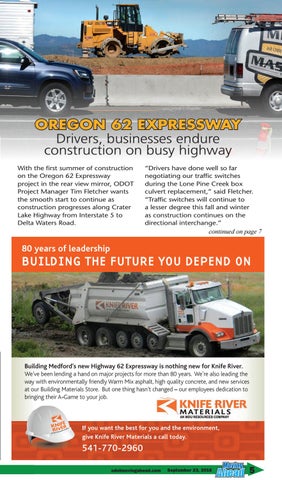