To the whimsical eye, the rock piles that appeared near the Bear Creek Bridges at Medford’s Interstate 5 Exit 30 might have been the movie set for a live-action Flintstones sequel.

However, ODOT District Manager Jerry Marmon is quick to dispel any Hollywood rumors as the Bedrock City-sized piles of rock were designed  to reinforce the twin I-5 spans in case of a catastrophic flood.

These Bear Creek Bridges were built in 1961, when I-5 first opened. Bridge inspections since have shown vulnerability to floods.

“The rock around the bridge footings was undersized and wouldn’t protect the bridge during the next major flood,” said Marmon. “If we lose the bridges, we lose a major connection for West Coast freight.”

These two bridges were identified as the highest risk to fail during a major flood, following surveys of I-5 bridges in the Rogue Valley.

Using ODOT-owned property as a staging area, the $2 million project strategically placed rock of various sizes around the supports, where some are grouted or cemented into place. According to ODOT Project Manager Ted Paselk, the process is engineered to obtain maximum protection for the bridges while ensuring the rocks don’t raise the water level in Bear Creek.

The project also took into account the adjacent Bear Creek Greenway to ensure the path remained open during the busy summer months. 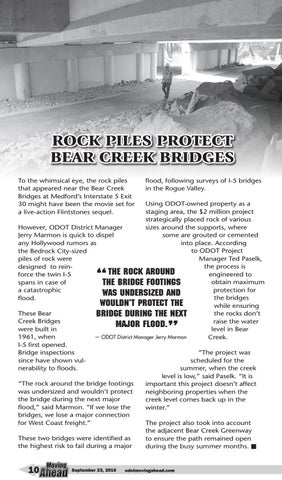