The March 15 open house will showcase a walk-though of the bridge needs and improvements planned as well as detail the construction impacts to traffic and nearby businesses. The event runs from 4 to 7 p.m. at The Lodge at Riverside, 955 S.E. 7th Street.

“During project scoping we encountered people with a personal connection to this bridge,” said ODOT Project Information Specialist Gary Leaming. “We’d like people to share their memories, the mementos and keepsakes that connect them to the Caveman Bridge.”

The public is encouraged to bring pictures, postcards or other mementos connected to the Caveman Bridge to the open house. Leaming said he will post pictures of the items shared on the project website.

The rehabilitation project is the first major upgrade of the Caveman Bridge built in 1931. Designed by famed Oregon bridge designer Conde McCullough, the bridge is a critical link in Grants Pass, spanning the Rogue River. Caveman Bridge serves as the gateway to the Redwood Empire of southwest Oregon and northern California. The historic gateway sign on the north side of the bridge will also undergo rehabilitation by the city of Grants Pass.

“Caveman Bridge is an important connection for the city and its identity,” said Grants Pass and Josephine County Chamber of Commerce President and CEO Colene Martin. “We know it will take some time to complete and have some impacts but know, in the end, it will all be worth it.”

The bridge rehabilitation project is expected to be completed by early 2019.

The rehabilitation project will:
• Repair sections of cracked concrete, exposed rebar and failed joints along the nearly 550-foot structure;
• Pressure wash the bridge and recapture all water;
• Repair bridge deck delamination by grinding off the existing asphalt cap and replacing it with a stronger, pre-mixed polymer concrete;
• Replace the bridge rail, maintaining its unique aesthetic while meeting today’s safety standards; and
• Add new lighting that maintains the character of the bridge’s street lights.

“Our goal is to return the bridge to its original glory,” said ODOT Bridge Engineer Bob Grubbs. “It will be restored as something the City of Grants Pass, the Rogue Valley and the state of Oregon can be proud of for many years.”

Construction work will take place from 7 p.m. to 7 a.m. with a single lane of traffic open. Twelve full-night closures, from 9 p.m. until 6:30 a.m., will be scheduled as needed over the length of the two-year project. Special project provisions targeted several no-work weekends to avoid conflicts with annual celebrations and other key community events.

“We’ve met with the City of Grants Pass, and several of the local businesses to hear their concerns and make project adjustments based on those conversations,” said ODOT Project Leader Stephanie Bentea. “With nearly 19 thousand vehicles using Caveman Bridge every day, we understand the importance of minimizing traffic impacts. We need
to find the balance between getting the work done and keeping traffic on the move.” 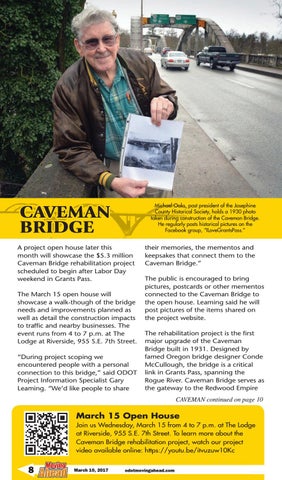